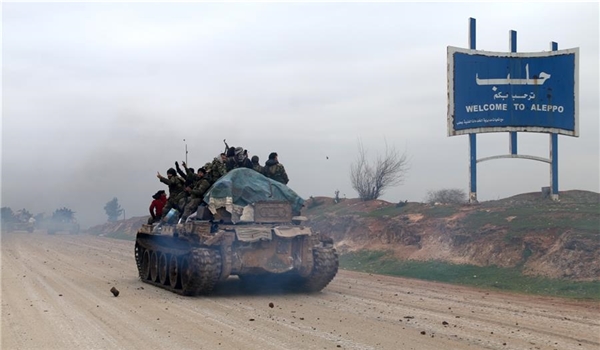 The Arabic-language service of Sputnik news agency quoted a source in the Syrian army Division 25 as saying that the two terrorist groups launched extensive attacks on Army-controlled Saraqib on Wednesday.

He added that clashes between the two sides lasted until afternoon, but the terrorists failed to capture any position or advance in the battlefield.

The source said that the Syrian army forces killed nearly 150 terrorists after repulsing their offensive, forcing the militants to withdraw towards their positions in the Northern and Southwestern parts of Saraqib.

In a relevant development on Wednesday, the Russian Reconciliation Centre for Syria stated that a group of up to 15 terrorists had attempted to carry out a chemical attack in Syria’s Idlib province.

“On 2 March, a group of up to 15 terrorists attempted to detonate explosive ammunition together with containers full of a poisonous chemical agent. The terrorists aimed to impede the advance of Syrian government forces in the western part of Saraqib city and then accuse the Syrian government of using chemical weapons”, the statement read.

The terrorists accidentally unsealed one of the containers, which resulted in a leak. Terrorists received “significant chemical poisoning” and failed to carry out the attack, the centre said.