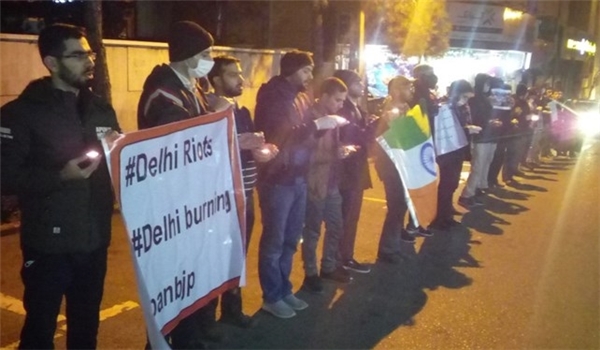 TEHRAN (FNA)- Iranian university students holding candles attended a vigil in front of the Indian embassy in Tehran on Tuesday night for the victims of the recent anti-Muslim violence in the Southeast Asian country.

The memorial ceremony was organized by Shahed University in Tehran and participated by the Iranian and Indian students.

The participants carried India’s flags and placards reading Indian slogans to condemn the massacre of the Muslims in the country.

They also prayed for the victims of the crime.

In a relevant development on Tuesday, a large number of Iranian students and seminaries had gathered in front of the Indian embassy in Tehran to protest at the brutal killing of Muslims in the country and censorship of the massacre in the world media.

The participants in the protest rally carried placards which called on the human rights and international bodies to break their silence on the harassment and violence against Muslims in India.

They also chanted slogans in support of the Indian Muslims and in condemnation of the crimes in India, calling on the Iranian foreign ministry to adopt an efficient measure to stop the killing.

The Iranian students and seminaries carried placards in different languages to deplore the massacre of the Muslims in India, calling on New Delhi to account for the crimes.

Iranian Foreign Minister Mohammad Javad Zarif on Monday condemned a recent outburst of violence against Indian Muslims, urging New Delhi to protect all of its citizens regardless of their faith and ethnicity.

“Iran condemns the wave of organized violence against Indian Muslims,” Zarif said in a tweet, while highlighting amicable relations between Tehran and New Delhi

“For centuries, Iran has been a friend of India,” he said, adding, “We urge Indian authorities to ensure the wellbeing of ALL Indians & not let senseless thuggery prevail.”

Earlier, on Monday, Iranian Foreign Ministry Spokesman Seyed Abbas Mousavi voiced his country’s serious concern about the rising atrocities against Muslims in India, adding that Tehran is consistently following up the case.

“We are following the news coming from India with concern,” Mousavi said in his weekly presser.

“The Islamic Republic of Iran is following up on the issue through many channels and we have heard that some Muslim countries have had some movements.”

“We know India as a country where all ethnicities and religions live peacefully side by side,” he said, adding, “We hope that violence against Muslims in India would come to an end.”

“Considering the wisdom of Indian authorities that we are aware of, the country will become a peaceful place for all ethnicities,” he said.

The worst anti-Muslim violence by Hindu nationalists began on the eve of a state visit by US President Donald Trump, infamous for his anti-Muslim rhetoric and policies.

A police statement on Saturday, however, came without elaborating on whether the detainees were perpetrators of deadly violence on mosques and ordinary Muslim residence or Muslims defending their homes against indiscriminate attacks by Hindu nationalists with little intervention by police officers and other government security forces.

Critics insist the law is discriminatory, coming in the wake of other severe government measures against the country’s Muslim population such as withdrawal of autonomy for Muslim-majority Jammu and Kashmir province that has intensified discord across India about the future of its 200 million Muslims.