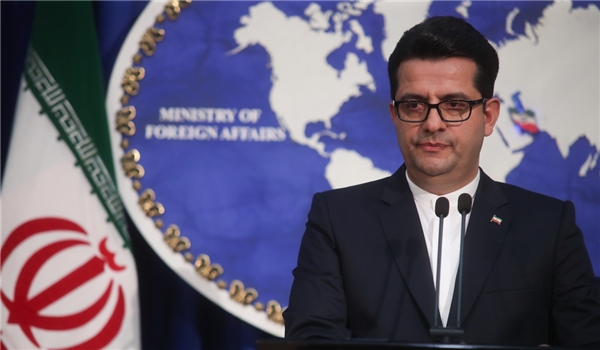 TEHRAN (FNA)- The Iranian foreign ministry in a statement on Sunday welcomed any development which helps peace and stability in Afghanistan, but meantime, underlined that it is legally unjustifiable for the US to sign a peace agreement or decide about the fate of the war-torn country.

“The Islamic Republic of Iran welcomes any development which helps peace and stability in Afghanistan and supports efforts to this end but under Afghan leadership and by Afghans,” Foreign Ministry Spokesman Seyed Abbas Mousavi said.

Mousavi said Iran believes that sustainable peace in Afghanistan is achieved only through Afghan-Afghan talks and partnership of the political groups in the country, including the Talliban, and considering the reservations of the neighboring states.

Mousavi noted that the US is attempting to legalize its military presence in Afghanistan, and added, “The US is legally unjustified to sign a peace agreement or decide about the fate of Afghanistan.”

He stressed that the UN enjoys proper capacities to facilitate Afghan-Afghan talks and monitor and guarantee implementation of the agreements.

Mousavi said that Iran respects Afghanistan’s sovereignty and territorial integrity, and is ready to help the country establish peace, stability and security, and expressed the hope that the next Afghan government would have friendly ties with its neighbors and would be able to uproot terrorism in the country.

The US and the Taliban movement signed the long-awaited peace agreement in the Qatari capital of Doha on Saturday, which includes US withdrawal from the country after 19 years.

The US and the Afghan government previously released a joint statement ahead of the US accord with the Taliban, in which Washington committed to pull out US and NATO military personnel from the Central Asian country within fourteen months.

Washington also pledged to refrain from the use of force to preserve the territorial integrity of Afghanistan and committed itself to not intervening in the country's domestic affairs.

Kabul, in turn, pledged to engage the UN Security Council to have the Taliban removed from its sanctions list by 29 May.

The agreement was signed by US Peace Envoy for Afghanistan Zalmay Khalilzad and one of the Taliban's senior leaders, Mullah Abdul Ghani Baradar.