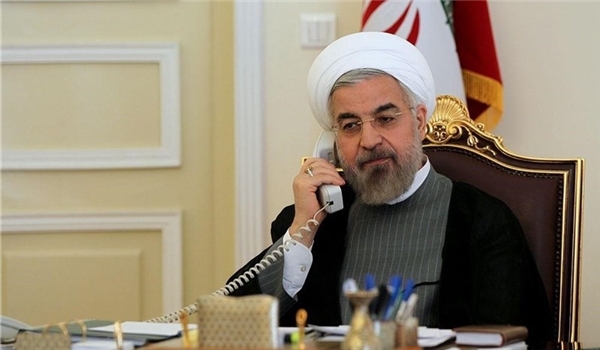 TEHRAN (FNA)- Iranian President Hassan Rouhani, in a telephone conversation with his Turkish counterpart Recep Tayyip Erdogan, called for annihilation of terrorists stationed in Syrian province of Idlib, stressing that the lives of civilians must be safeguarded.

In a telephone conversation with Erdogan on Saturday, President Rouhani described the issue of Idlib as "very complicated", noting that dangerous terrorists have stationed forces in the area that must be uprooted.

Rouhani urged the issue of Syria to be resolved through political means.

He stressed the importance of settling the ongoing unrest in Idlib of Syria, adding the situation in the country could be resolved through trilateral cooperation among Iran, Turkey and Russia.

He further noted that the lives of the innocent people living in the area should be protected.

Expressing readiness for hosting the upcoming Astana peace process, he termed the process as a great achievement for the regional security.

Political dialogues are the only way of resolving disputes in Syria, he said calling on Iran to cooperate to this end.

He reaffirmed the impact of Iran-Turkey-Russia agreement within the Astana peace process, adding the talks have yielded good results and must continue to achieve lasting peace.

The situation in Idlib cannot continue, he said expressing concern over the recent achievements of the process.

The Iranian Foreign Ministry, in a statement on Friday, voiced concern over the deterioration of the situation in the Northwestern Syrian province of Idlib, and voiced its readiness for measures to reduce tensions.

“We are carefully monitoring the field developments and regional outcomes of the developments in Idlib, and we will continue our efforts to end the current tensions,” the statement read.

The statement further highlighted the need for the sides to properly manage the situation so as to ease the fomented tensions as soon as possible.

The statement further said, the Islamic Republic of Iran, in light of the previous decision by leaders of the Astana peace process to hold the next summit in Tehran, emphasizes the continuation of its efforts to hold the summit it in the current critical situation, and believes that the summit may be a continuation to the efforts on combating terrorism, avoiding any harm to civilians and resolving political conflicts is an effective step.

The Foreign Ministry also condemned the efforts by some countries that aim to tarnish the real outcomes of the summit.

The Arabic-language media outlets reported that a Turkish Army combat tank was targeted and destroyed. There are no reports on the possible casualties of the Turkish Army.

In a relevant development on February 19, the Turkish Army had sent around 300 military vehicles to its observation points in the Syrian province of Idlib.

According to Haberturk broadcaster, the military trucks, armored vehicles, and self-propelled guns are heading to the de-escalation zone, Haberturk reported.

This deployment comes after Ankara performed strikes against the Syrian Arab Army (SAA), claiming that Damascus violated a ceasefire after several Turkish servicemen died during the army's attack at the observation point in Idlib.

The Syrian government, however, stated that the various armed factions in Idlib – the last stronghold of jihadists in the country – ignored the agreement, repeatedly attacking the military.

According to Damascus, there are at least 70,000 militants in the rebel-controlled part of the province, with many of them belonging to the al-Nusra terrorist organization.

Erdogan vowed to drive the Syrian forces from the de-escalation zone before the end of February, also threatening to launch a full-scale military offensive in all areas if Damascus attacks the Turkish Army.

TEHRAN (FNA)- Deaths and new infections in Mexico are still rising, and the country has not launched a widespread testing regime or imposed the kind of strict lockdown used in parts of neighboring Central America. [PHOTOS]

TEHRAN (FNA)- The third Iranian oil tanker, named Petunia, has entered the Venezuelan waters to deliver its much-needed gasoline cargo. Just like the first and second tanker, Petunia is being escorted by the Latin American country’s navy to its destination. [VIDEO]

Maduro Thanks Iran for Sending Oil Tankers; Slams US for Disrupting Fuel Shipments to Venezuela

TEHRAN (FNA)- Venezuelan President Nicolas Maduro has thanked Iran for sending 5 oil tankers to his energy-hungry and sanction-hit nation, while slamming the US for disrupting international fuel shipments headed to the Latin American country. [VIDEO]

TEHRAN (FNA)- Anger over the death of George Floyd under a police officer’s knee spilled into the streets of Minneapolis for a second night Wednesday, with a shooting death, widespread looting and a fire that shrouded the Lake Street neighborhood in smoke. [PHOTOS]

TEHRAN (FNA)- Hundreds of Colombian migrants, tourists, and students remain stranded in Sao Paulo International Airport due to a lockdown their country imposed to halt the spread of the new coronavirus. [PHOTOS]

TEHRAN (FNA)- The United Nations refugee agency says its work in Yemen is near a “potential breaking point” as coronavirus spreads in the war-damaged country, with rising numbers of families dying from hunger and disease.

26 Arrested in France, Belgium over Truck Deaths of 39 Vietnamese Migrants

TEHRAN (FNA)- The French prosecutor's office said on Wednesday that 26 people had been arrested in France and Belgium in connection with the deaths of 39 Vietnamese migrants found in the back of a truck near London last year.

Iran: Brutal Killing of Floyd Indicates Systematic Racism in US

TEHRAN (FNA)- Iran on Thursday blasted again the US police for showing violence against the black people, describing it as an indication of systematic racism in the country.

TEHRAN (FNA)- More than 159,000 excess deaths coinciding with the ongoing coronavirus pandemic have been reported in 24 European countries since early March, Hans Kluge, the WHO regional director for Europe, said on Thursday.

TEHRAN (FNA)- Commander of the Islamic Revolution Guards Corps Navy Rear Admiral Alireza Tangsiri announced that the IRGC speed boats are able to voyage at the speed of 92 knots per hour, three times faster than the US vessels.

TEHRAN (FNA)- The elites who rule the West have put selfish or ideological goals first when choosing their response to the COVID-19 pandemic, Russia’s foreign Minister said in a scathing op-ed.

TEHRAN (FNA)- The Iranian health ministry announced on Thursday that 2,258 new cases of infection with COVID-19 virus have been identified in the country in the past 24 hours, expressing pleasure that more than 112,000 patients have recovered.

VP: Iran Exporting Machinery to Europe for Production of Masks