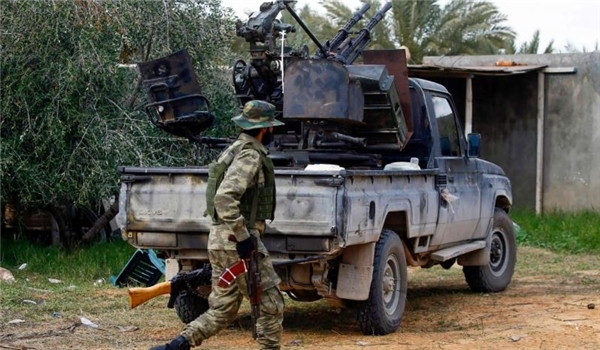 TEHRAN (FNA)- Civilians are bearing the brunt of Western military intervention and war in Libya. They have also been bogged down in the middle of influence war between the mostly Tripoli-confined Fayez al-Sarraj's GNA and Tobruk-based Libyan-American citizen Khalifa Haftar-led LNA.

The chronic armed conflicts in most parts of the country since the killing of Gaddafi has displaced more than 300,000 civilians and killed thousands of people. While global foes Russia and the US are at odds in Libya too with the former supporting the GNA and the latter LNA, over Libya's proximity to its shores, the European Union is also struggling to find a unified approach to the Libyan catastrophe over its wider concerns that France was providing military support to the warlord Haftar.

The Berlin Conference on Libya last month, to forge a ceasefire agreement between the two main warring parties, also conceded that the instability, foreign interference, weapon proliferation and economy of predation bowled threats to international peace and security. But since the two vying sides were irreconcilable and have effectually split the state into East and West zones, not much optimism can be laid on the effort either.

Regional divergence is another challenge for an enforceable truce in Libya. After Turkey signed two agreements with GNA in November, a mutual defense treaty and a maritime deal, four other Mediterranean nations – France, Greece, Egypt and Cyprus – strongly condemned the Turkish move and called the pacts "null and void" claiming that they violate the territorial rights and undermined regional stability.

Following Turkish President Tayyip Erdogan's admission that his military had suffered some losses in Libya but "neutralized" close to 100 fighters there – armed confrontations could escalate in the hapless country and can bully Geneva peace talks to implement a long-lasting ceasefire.

The signs of bigger tensions are already being materialized as LNA claimed of killing 16 Turkish fighters and a frigate near the port of Tripoli. Ankara's military actions are not viewed positively in the ranks of Erdogan supporters. Turkey's former foreign minister Yassar Yakis recently cautioned him about the dangers of his policies in Syria and Libya.

It is quite clear that the snowballing process – which started off in Tunisia, expanded to Egypt and finally plagued Libya – did not lead to the social improvements, many Libyans would have hoped. The people in the country would be pressed to believe that they were more secure and well-off during Gaddafi government.

There is some strong social statistics to make them think in those lines. Under the Gaddafi rule, the living standard of the people in Libya was among the best in Africa and they were enjoying free electricity, medical care and education and subsidized housing and transport. The ongoing conflicts have stolen food and money from them as well as put their life security on the brink of jeopardy apart from making them homeless.

In the midst of deteriorating economic and peace conditions in Libya, international stance of employing peaceful means to resolve Libyan conflict once again proved vindicated. The world’s warning – if military action brings disaster to civilians and causes humanitarian crisis in Libya then it runs counter to the purpose of the UN resolution – is as real today as it was about 10 years ago.

The 5+5 Libyan Joint Military Commission dialogue should only put into effect a durable ceasefire and restore security to civilians if the regional and global players respect the territorial integrity of Libya and refrain from meddling into the beleaguered country’s internal affairs.