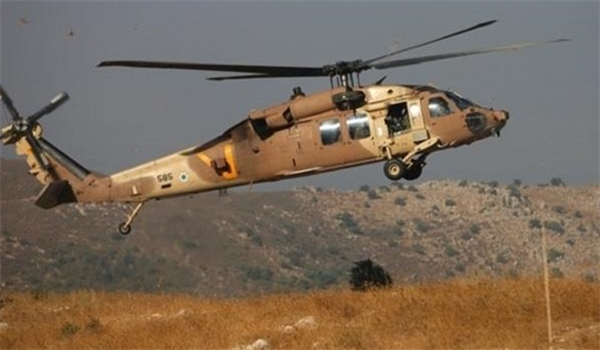 TEHRAN (FNA)- Israeli military helicopters attacked Syrian army positions in the Arab country’s Southwestern province of Quneitra near the occupied Golan Heights as tensions soar between the Tel Aviv regime and the Damascus government over an earlier airstrike.

Syria’s official news agency SANA reported the aircraft fired missiles at the positions of Syrian government troops in the city of Quneitra, located some 65 kilometers South of the capital Damascus, and the nearby towns of al-Qataniyah and al-Hurriyet.

Three soldiers were injured in the aerial attacks that were carried out late on Thursday night.

There was no immediate response from the Israeli Army, which rarely acknowledges strikes conducted in Syria.

The bombings came hours after one person was killed in an Israeli drone attack in the same Syrian province.

“A civilian was martyred when his car was targeted by a drone belonging to the Israeli enemy south of the town of Hader,” SANA reported.

SANA noted that the victim was traveling in his car along a road in Hader village on Thursday, when the Israeli drone fired a missile, killing him on the spot.

The so-called Syrian Observatory for Human Rights announced that the victim was a member of the "Syrian resistance to liberate Golan", without elaborating.

Quneitra Governor Humam Dibyat identified the person killed as Adel Tawil and added he worked at a police station and was targeted while returning home from work.

“He was innocent. He was an honorable nationalist,” Dibyat was quoted as saying by The Associated Press news agency.

Israel seized the Golan Heights from Syria after the 1967 Six-Day War and later occupied it in a move that has never been recognized by the international community.

The regime has built dozens of settlements in the area ever since and has used the region to carry out a number of military operations against the Syrian government.

The Syrian Ministry of Foreign Affairs and Expatriates, in a statement at the time, called the US decision a “blatant attack on the sovereignty and territorial integrity” of Syria.

“The liberation of the Golan by all available means and its return to the Syrian motherland is an inalienable right,” according to the statement carried by SANA, which added, “The decision ... makes the United States the main enemy of the Arabs.”

The Arab League also condemned the move, saying "Trump's recognition does not change the area's status".