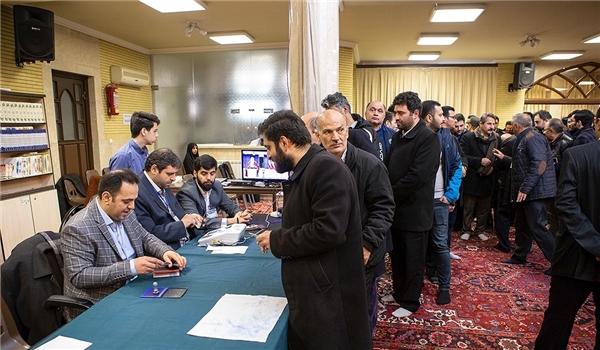 The Interior Ministry extended the voting deadline for a third and last time to keep the polling stations open until 24:00 (2030GMT).

Due to a high turnout, the Interior Ministry extended the voting deadline for 6 hours. Voting started at 8am local time (0430GMT) and was to end at 18:00 local time (1430GMT).

Ballot counting starts in less than an hour after all voters leave stations and Interior Ministry and Guardian Council election supervisory boards and monitors do the needed checks and controls.

Initial results in small cities and towns are expected to appear Saturday morning. Yet, the final results for larger cities, including the metropolitan capital Tehran, are expected in several days from now.

Tens of millions of Iranians headed to the polls to elect 290 members of Majlis (the parliament) and 7 members of the Assembly of Experts in its midterm elections on Friday morning.

Candidates from across the political isle were vying for 30 parliamentary and 3 Experts Assembly seats in the capital.

Long queues of people were reported in different cities and towns of Iran, including the capital, Tehran.