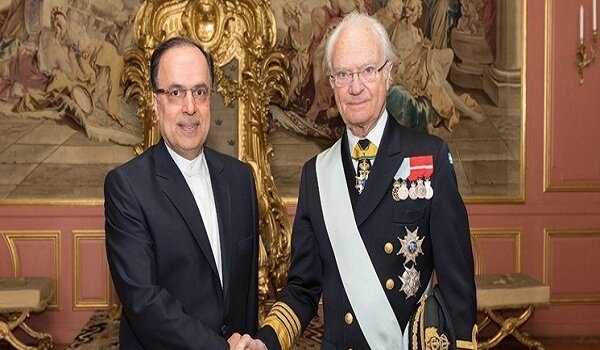 TEHRAN (FNA)- Iran's newly-appointed Ambassador to Stockholm Ahmad Masoumifar, during the ceremony to submit his credentials to the King of Sweden Carl XVI Gustaf, said that he hopes for stronger ties between the two countries during his tenure in the European country.

Masoumifar submitted his credentials to the King of Sweden Carl XVI Gustaf on Thursday, where he expressed hope that, as an ambassador of the Islamic Republic of Iran, he could take effective steps in strengthening the relations between the two countries and two nations.

He also submitted a copy of his credentials to the director of Sweden’s Foreign Ministry Formalities Department on Wednesday.

The new ambassador has previously served as Iran's ambassador to South Korea, consul general in Shanghai and charge d'affaires in Malaysia.

In a Tweet in December, Iranian Foreign Minister Mohammad Javad Zarif called upon European countries, including Sweden, not to escape from their human responsibility towards Iranian patients with hollow paper promises, urging the bloc to practically resume the sale of needed medications and pharmaceuticals to his country.

Iranian children suffering from epidermolysis bullosa (EB) are the new victims of inhumane US sanctions against Tehran, as Washington’s bans are preventing a Swedish supplier from sending protective bandages to the country, according to an NGO which says American bans have so far killed 15 of these children.

Since the reimposition of sanctions, Swedish medical products firm Molnlycke Health Care has stopped delivering Mepilex dressings which are trusted around the world to treat a wide range of chronic and acute wounds, including in EB patients, Iranian media reports say.