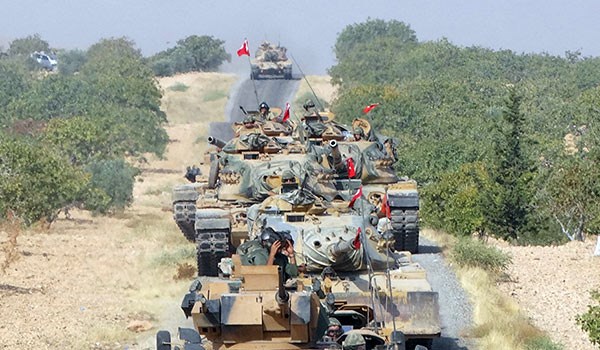 TEHRAN (FNA)- Moscow announced that Ankara has sent large amounts of ammunition and armored vehicles into Syria’s Idlib province, apparently in preparation for its anticipated large-scale operation in the war-torn country.

The deployment comes as Turkey announced Thursday it wanted no “face-off” with Moscow over Syria’s offensive against militants near the two countries’ border but said it might receive US defense missiles to protect Turkish forces.

Amid an imminent operation by Turkish forces in Idlib, the Russian Defense Ministry has urged Ankara to allow Syrian civilians to enter government-controlled parts of the Arab country.

The Kremlin also announced on Friday that a summit of heads of Russia, France, Germany, and Turkey on Syria is under discussion.

Tensions have mounted in the last three months between Turkey, which backs anti-government militants in Syria, and Russia which backs the Syrian Army’s offensive in Idlib, the last militant-held region of the country.

Earlier this week, a Turkish delegation arrived in Moscow for talks regarding the situation in Idlib. However, Ankara announced it was dissatisfied with the negotiations, and no deal was struck.

President Recep Tayyip Erdogan stated on Wednesday that Turkey was fully ready for its own operation in Idlib and could launch it at "any minute".

On Friday, he noted that Turkey will not withdraw from Idlib Province as long as Syrian government forces continue to press on with their 'violent onslaught'. Erdogan added that the talks with President Vladimir Putin to be held later in the day over the phone will determine Turkey's actions in Idlib Province.