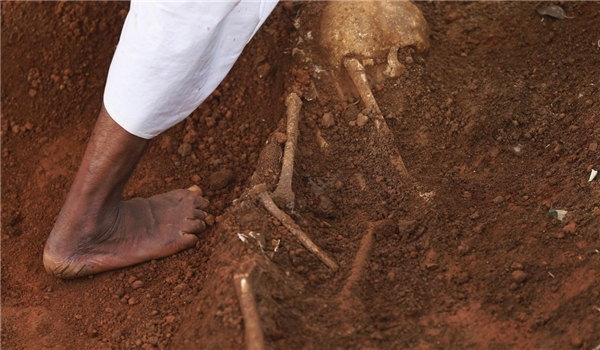 TEHRAN (FNA)- Over 6,000 corpses were recently uncovered in six mass graves in Burundi, it was revealed on Saturday.

Pierre Claver Ndayicariye, chairman of the Burundi’s Truth and Reconciliation Commission, said the remains of 6,032 victims were recovered, alongside of thousands of bullet casings.

Many victims were identified through clothes, glasses, and religious jewelry, including rosaries, according to The Guardian.

In reference to one massacre believed to have targeted people from the Hutu ethnic group, Ndayicariye said families of the victims are now able to “break the silence” imposed 48 years ago.

Burundi’s population is sharply divided between the Tutsi and Hutu ethnic groups.

A 2005 civil war between elements of the two tribes killed at least 300,000 people, including entire families and children, before it ended in 2005.

The discovery in the Karusi province of the nation is the largest since the government agency commenced nationwide excavations in January.

The East African country launched the project in 2014 to investigate atrocities committed since 1885.

During the early 20th century, Germany, Belgium and England fought bitter proxy wars across the nation, destroying infrastructure and wiping out entire villages.

To come to terms with the nation's violent past, dominated by colonial occupation, civil war, decades of massacres and horrific ethnic cleansing, the agency has been tasked with bringing to light evidence of the crimes.

This civil war ended in 2005, and in 2008 a long-delayed peace deal was implemented.