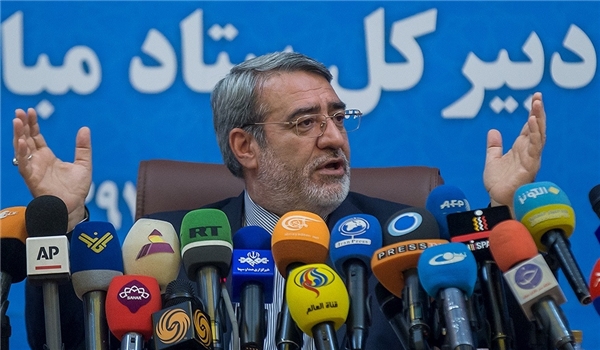 TEHRAN (FNA)- The Iranian Ministry of Interior announced that it has tasked inspection teams with comprehensively monitoring the electoral process against any potential fraudulent activity to safeguard the votes and the equal grounding of the competitions.

The observer teams have been watchful of the candidates’ electoral engagement and the behavior of those associated with them over the past month, Iranian Interior Minister Abdolreza Rahmani Fazli told reporters in Tehran on Thursday.

“So far, there have not been many reports pointing to fraudulent activity,” he added.

The minister noted that the nominees had launched their campaigns on Thursday, adding, “The [most recent] report that has been delivered to me until now points to decent security of the electoral environment.”

The minister hoped that the elections remain untainted by fraud, urging all the participating elements to act “exactly” in accordance with the relevant legal principles.

Those eligible to vote, he added, number more than 57 million.

Rahmani Fazli also said the ministry had proposed two Fridays in the first month of the next year on the solar calendar for a potential run-up that would take place if the elections head into a second round. It has notified the Guardian Council of those dates, and is prepared to hold any such second round on whatever date that is approved of by the top supervisory and vetting body.

Iran is to hold the parliamentary elections on February 21 to appoint lawmakers to its 11th Parliament since the country’s 1979 Islamic Revolution.

More than 7,000 candidates are standing in the elections, including five candidates representing Iran’s religious minorities. In line with the national Election Office’s instructions, an eligible contestant’s age should range from 30 to 75.

Last year, the parliament objected to a motion to increase the number of the elective seats, keeping it at 290.

The aspirants hail from 208 constituencies.

Some were disqualified from partaking in the race by the Guardian Council.

According to the interior minister, however, more than 91 percent of the hopefuls have been approved by the Council, who had received the records and credentials of more than 15,000 people.

Considering the size of the electorate, there would be one lawmaker at the parliament per each 190,000-strong segment of the Iranian population.

The elections come every four years.

As with the previous round, the major rivaling camps are those of Principlists and Reformists.

In the last legislative elections, the Hope List comprising Reformist candidates secured relative majority at the parliament after winning 122 seats over two rounds of elections. In all, the Reformist camp together with moderate candidates took 137 seats against 120 seats that went to the Principlists.

Leader of the Islamic Revolution Ayatollah Seyed Ali Khamenei has called for a high turnout in the upcoming elections, saying a lively vote guarantees the Iranian nation’s security and contributes to efforts towards resolving the problems.

The campaigns officially started at 00:00 Thursday (20:30 GMT, Wednesday), and the candidates will have one week to win the people’s support for their candidacy.

The 11th parliamentary elections and the midterm elections for the Assembly of Experts – a body whose members designate the country’s Leader – are to be held simultaneously on next Friday.

The candidates will have until Wednesday night to promote themselves, and after that, there will be a 24-hour silence until the voting begins on Friday morning.

In capital Tehran, 1,453 candidates are contesting one of the 30 allocated seats on the legislature.