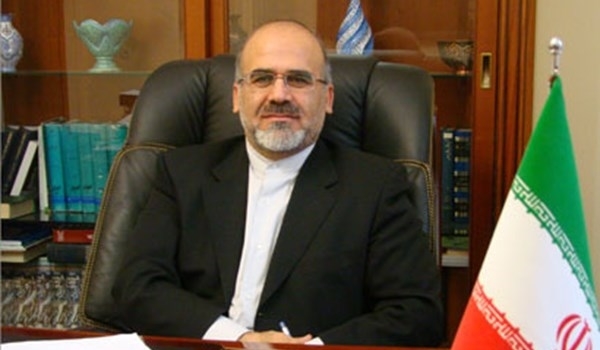 TEHRAN (FNA)- Iranian Ambassador to Dublin Massoud Eslami called on the international community to counter the US unilateralism.

US unilateralism has turned into a phenomenon in the world and the international community should counter it as it is doing with terrorism, Eslami said in a meeting with Chairman of the Senate of Ireland Denis O'Donovan  on Wednesday.

The US government has endangered many international norms with its abusive behavior, and if all members of the international community do not cooperate and stand up to the challenge of American unilateralism, they will pay a great deal in the future, he said.

US policy of maximum pressure has no legal and principle basis and affects 82 million population of Iran, Eslami said.

O'Donovan, for his part, described Dublin as a friend of Tehran, and stressed the need for promoting bilateral ties between the two countries.

Supporting multilateralism as a key issue in Ireland's foreign policy, he said, "We are a friend of Iran and bilateral relations are longstanding."

In relevant remarks last May, Iranian Ambassador to the International Atomic Energy Agency (IAEA) and other world bodies headquartered in Vienna Kazzem Qaribabadi had also called on the international community to stand against the US unilateralism, saying that Washington’s coercive foreign policy runs counter to international law and the Charter of the United Nations.

The US government is involved at a high level in unilateral and coercive measures such as imposition of sanctions, threats of use of force, military intervention, and even acts such as withdrawal from international treaties and agreements, said Qaribabadi, in his address to a ceremony commemorating the International Day of Multilateralism and Diplomacy for Peace. The event was held in Vienna hosted by the Non-Aligned Movement.

Multilateralism is based on respect for the rule of law, and ensures the interests of countries and the international community, he said, voicing regret that such principles today are suffering from the US’ penchant for unilateralism.

These actions by a country that sees itself as international police are definitely in conflict with international law and the Charter of the United Nations, Qaribabadi said, calling on the global community to stand in opposition against such measures and commit itself to multilateralism and the rule of law.