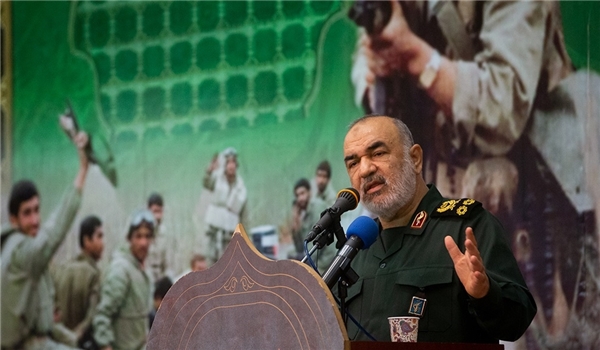 General Salami said on Wednesday that the Iranian people proved in Feb. 11 rallies that they will undoubtedly continue the path of revolution with power.

He added that a difficult path has been followed to consolidate the independence and dignity of this land, noting that despite all the conspiracies of the enemies, the Islamic Republic is at the pinnacle of glory and progress.

Hundreds of domestic and foreign reporters are said to be covering the Bahman 22 (February 11) rallies.

The rallies are crucially important this year as the event comes only a month after riots in a number of cities and towns across the country.

Trump Says He Had 'Tough Talk' with Johnson over Huawei, Threatened to Stop 'Doing Business' with UK

TEHRAN (FNA)- President Donald Trump boasted in an interview with Fox News about having had a "tough talk" with his British colleague, Prime Minister Boris Johnson, over the Huawei matter.

TEHRAN (FNA)- The COVID-19 pandemic has shed new light on the needs for improved disinfection methods, both for individuals and facilities.

TEHRAN (FNA)- Nearly a third of Afghanistan’s population – or 10 million people – has been infected with the coronavirus, according to Health Ministry estimates published Wednesday.

TEHRAN (FNA)- China has lodged solemn representations to the United States regarding the scheduled visit of US Health and Human Services Secretary Alex Azar to Taiwan, a Foreign Ministry Spokesperson said Wednesday.

TEHRAN (FNA)- Bells tolled in Japan's Hiroshima for the 75th anniversary of the world's first atomic bombing, with ceremonies downsized due to the coronavirus pandemic and the city's mayor urging nations to reject self-centred nationalism and commit to nuclear disarmament more seriously.

One Death Every 80 Seconds: Grim New Toll of COVID-19 in America

TEHRAN (FNA)- Over the last seven days, a grim new COVID-19 calculus has emerged, as one person died every 80 seconds from the coronavirus in America.

TEHRAN (FNA)- To blame China for this pandemic is to rewrite the history of COVID-19 and to marginalize the failings of Western nations, Dr. Richard Horton, editor-in-chief of medical journal The Lancet, stated.

TEHRAN (FNA)- Scientists investigating Alzheimer’s treatments at the Salk Institute have uncovered some key mechanisms that enable an experimental drug to reverse memory loss in mouse models of the disease. The discovery not only bodes well for the possibility of clinical trials, but provides researchers with a new target to consider in the wider development of compounds to counter the degenerative effects of the condition.

TEHRAN (FNA)- The number of confirmed coronavirus cases in Germany increased by 1,045 to 213,067, data from the Robert Koch Institute (RKI) for infectious diseases showed on Thursday.