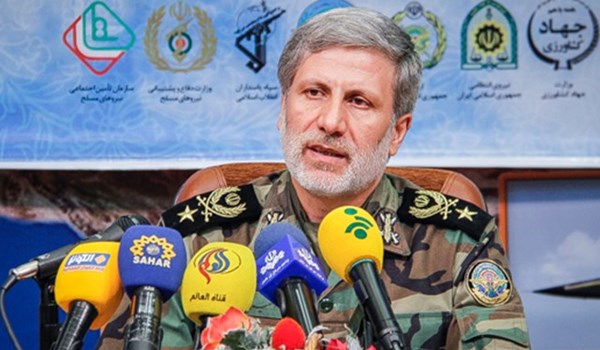 TEHRAN (FNA)- Iranian Defense Minister Brigadier General Amir Hatami dismissed some western states' alleged concerns over the country's satellite carriers, saying all Iranian missiles have been designed and made to be armed with conventional warheads.

"The issue of launching satellite and satellite carrier is a clearly known phenomenon in the world and is no way related to (Iran's) missile issue," General Hatami told reporters after a cabinet meeting in Tehran on Wednesday.

He added resolution 2231 calls on Iran to avoid development of missiles with the capability to carry nuclear warheads, and said, "All our missiles that are a source of honor and an important element of the Islamic Republic of Iran's defense and military power are armed with conventional warheads and thanks God, they enjoy very high precision-striking power and the Americans have also felt this in (Iran's last month attack against) Ein al-Assad and we do not need anything else."

General Hatami, meantime, said that Iran is likely to use satellites with defensive goals, but noted, "Satellite carrier is a fully non-defensive issue and is an inalienable and decisive right of the Iranian nation and we continue development of this program powerfully."

He added that Iran will launch the home-made Zafar-2 satellite on the back of Simorq carrier early next year (spring).

Resolution 2231 merely "calls on" Iran “to refrain from any activity related to ballistic missiles designed to be capable of delivering nuclear weapons.”

Iran maintains it has no intention of acquiring nuclear weapons, and says its aerospace activities are peaceful and do not violate the Security Council resolution.

The Public Relations Department of Iran's Defense Ministry on Sunday, cited Spokesman for the Iranian Space Agency (ISA) Ahmad Hosseini as saying, “Simorq satellite carrier took Zafar satellite into space with success, but the carrier failed to reach the speed needed to get the satellite into the designated orbit."

He added that the data from the launch will be used to optimize future launch attempts.

After the failure of Zafar satellite launch, Iran's Minister of Information and Communication Technology Mohammad Javad Azari Jahromi said in a Twitter post that despite the failure "we're unstoppable," promising that "We have more Upcoming Great Iranian Satellites".