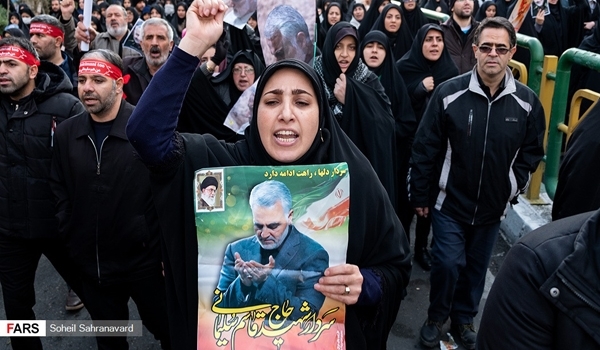 TEHRAN (FNA)- The Iranian people participating in the February 11 rallies on Tuesday underlined in a final resolution their determination to take a harsh revenge for the US assassination of IRGC Qods Force Commander Lieutenant General Qassem Soleimani, stressing efforts to expel the American army from the region.

"We see serious determination to take a harsh revenge for the martyrdom of Lieutenant General Qassem Soleimani, [Deputy Commander of Iraq's Popular Mobilization Forces (PMF)] Abu Mahdi al-Muhandis and their comrades as a general command for the Iranian people," the resolution said.

"We declare that we will not sit silent until we expel the American occupiers from West Asia completely and wipe out the fake child-killer (Zionist) regime," it added.

The resolution also stressed that there will be no new talks with the United States as it has proved to be a terrorist country that cannot be trusted.

It also condemned the new US plot for the region, ‘Deal of the Century’, saying that it will be thrown to the dustbin of history.

Finally, it invited the Iranian people to participate in the upcoming parliamentary election in massive turnout.

The rallies were crucially important this year as the event came just few months after riots in a number of cities and towns across the country.