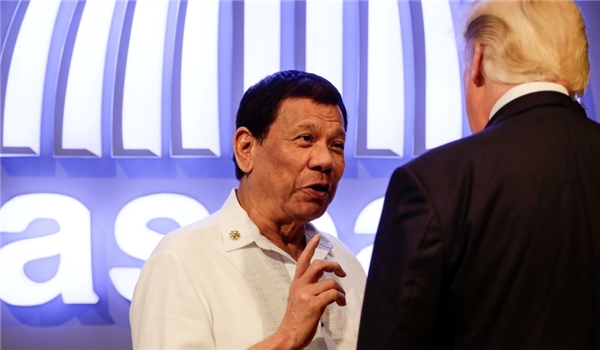 TEHRAN (FNA)- Philippine President Rodrigo Duterte plans to order the termination of the country's visiting forces agreement with the United States, his spokesman stated on Friday.

Presidential Spokesman Salvador Panelo noted that Duterte was also scheduled to speak to US President Donald Trump at "any time", but the agenda was not clear, Al-Jazeera reported.

"I will instruct the executive secretary to tell the foreign secretary to send the notice of termination to the US government," Panelo quoted Duterte as saying.

It was not clear when the notice would be sent.

"I'm warning you ... if you won't do the correction on this, I will terminate the ... Visiting Forces Agreement. I'll end that son of a b****," the brash-speaking Duterte said in a January 23 speech.

The agreement provided a framework for the temporary entry of US troops to the Philippines for joint training exercises with Filipino forces.

The pact can be terminated through written notice from either party, which would take effect in 180 days.

At the end of last year, Duterte had also ordered a ban on US senators from entering the Philippines.

That was in response to the US doing the same against Filipino officials who played a role in the detention of opposition Senator Leila De Lima, a staunch critic of the president's campaign against illegal drugs.

The president has barred his cabinet officials from travelling to the US and turned down an invitation to join a special meeting with Trump and leaders of the Association of Southeast Asia Nations in March.

A separate defence pact subsequently signed by the allies in 2014, the Enhanced Defense Cooperation Agreement, allowed the extended stay of US forces and authorised them to build and maintain barracks and warehouses and store defence equipment and weapons inside five designated Philippine military camps.

But terminating the VFA would affect more than 300 joint trainings and other activities this year alone with US forces "which the Philippine military and law enforcement agencies need to enhance their capabilities in countering threats to national security", according to Dutertes' Foreign Affairs Secretary Teodoro Locsin Jr.

The US provided more than $550mln in security assistance to the Philippines from 2016 to 2019, Locsin said, adding that there may be a "chilling effect on our economic relations" if the Philippines draws down its security alliance with Washington.

US forces have provided intelligence, training and aid that allowed the Philippines to deal with human trafficking, cyberattacks, illegal narcotics and terrorism, Locsin noted, citing how US military assistance helped Filipino forces quell a disastrous siege by armed fighters aligned with the Islamic State of Iraq and the Levant (ISIL, ISIS or Daesh) terror group in the Southern city of Marawi in 2017.