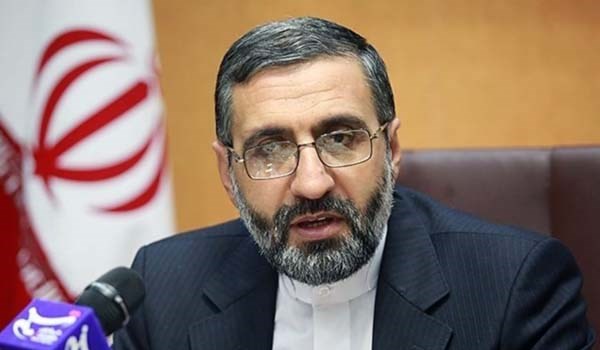 TEHRAN (FNA)- An Iranian court has issued death penalty for a person who has spied for the US intelligence service (CIA) in the country, Judiciary Spokesman Gholam Hossein Esmayeeli said on Tuesday.

"Amir Rahimpour who spied for the CIA and received huge amounts of money and attempted to provide the US intelligence service with a part of Iran's nuclear information was tried and had been sentenced to death and the supreme court has also recently endorsed his sentence and he will be punished soon," Esmayeeli told reporters in a press conference in Tehran today.

He added that two others who also collected intelligence for the US under the disguise of a charity have also stood on trial and were sentenced to 10 years of prison for espionage operations and 5 more years for acting against security.

Last year, Iran issued rulings for two persons who spied for the US and Saudi Arabia in the country.

"Rulings have been issued for two spies of the US and Saudi (intelligence) agencies," Esmayeeli told reporters in a press conference in Tehran in May.

The spokesman declined to reveal any further details.

US Hits 105,000 COVID-19 Deaths as Country Plunges into New Crisis over Death of George Floyd

TEHRAN (FNA)- The coronavirus death toll passed 105,000 in the United States, according to a Johns Hopkins University tracker, a grim new milestone as the country has gripped by deadly disease, unemployment and now outrage at the police over death of an unarmed black man at the hands of four white cops.

TEHRAN (FNA)- Iranian Foreign Minister in an Instagram message announced a plane carrying the country's scientist Siruos Asgari who was illegaly jailed in the US is heading towards Tehran.

TEHRAN (FNA)- Twenty-three people were arrested in London as thousands of Black Lives Matter protesters peacefully marched on the US Embassy in London, with hundreds more taking to the streets of Cardiff and Manchester, to demonstrate against the killing of George Floyd. [PHOTOS]

TEHRAN (FNA)- The novel coronavirus death toll rose to 5,598 in India on Tuesday with 204 more fatalities, while 8,171 new cases took the number of infections to 1,98,706, the Health Ministry said.

At Least 2 Killed, 60 Arrested Amid Unrest in Chicago Suburb

TEHRAN (FNA)- Officials in suburban Cicero announced that two people were killed during unrest in the community on Monday, and that at least 60 people have been arrested.

French Economy To Shrink 11% This Year

TEHRAN (FNA)- The French economy is expected to shrink 11 percent this year because of the coronavirus crisis, a "brutal" shock and worse than the government's previous forecast of an eight percent contraction, Finance Minister Bruno Le Maire said Tuesday.

TEHRAN (FNA)- A spike in new coronavirus infections traced to small Protestant churches and gatherings have rekindled fears over possible spread of the virus through the densely-populated greater Seoul area.

TEHRAN (FNA)- Chinese officials ordered major agricultural companies to pause purchases of some US farm goods, including soybeans, amid heightened tensions with Washington over Hong Kong.

TEHRAN (FNA)- Iranian Vice-President for Science and Technology Sorena Sattari praised his nation's achievements in campaign against the coronavirus, and said today technology is considered as Iran's might.

TEHRAN (FNA)- Iranian Parliament Speaker Mohammad Baqer Qalibaf said on Monday that bolstering friendly ties with Afghanistan is of significant importance to Tehran, and expressed hope that both countries will improve parliamentary cooperation.

TEHRAN (FNA)- A few dozen protesters knelt in silence and held signs in front of the US embassy in Paris on Monday in solidarity with George Floyd, an African-American whose death in police custody last week has sparked unrest in the United States.

TEHRAN (FNA)- US President Donald Trump's recent remarks on China's COVID-19 prevention and control were totally unfounded and were extremely disrespectful of the great efforts and sacrifices made by the Chinese people, a foreign ministry spokesperson said Monday.
﻿
﻿
Sections