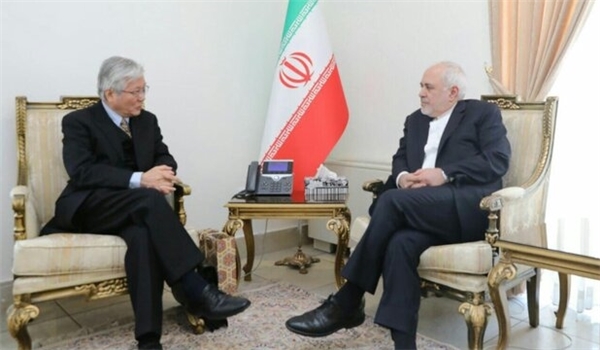 TEHRAN (FNA)- Iranian Foreign Minister Mohammad Javad Zarif once again reiterated Tehran’s stance in support of the peace process under the Afghan government, and rejected any other plan that excludes Kabul from talks or ignores the intra-Afghan concept of the process.

In a meeting with Head of the United Nations Assistance Mission in Afghanistan (UNAMA) Tadamichi Yamamoto in Tehran on Monday, Zarif stressed the need for protecting votes of the Afghans and declaration of final results with transparency, expressing hope that the new Afghan government would be able to start its work soon.

The top diplomat also voiced Iran's support to the peace process until an agreement among Afghan groups, including Taliban, is reached.

Zarif stressed that the US plans cannot be trusted and called for the UN active role to ease peace talks.

Yamamoto, for his part, explained developments unfolding in the country and appreciated Iran for its backing during years of war in Afghanistan, and hailed Iran's positive role in helping solve problems faced by Afghanistan.

The UN team is currently in Tehran to discuss Afghan developments with the Iranian officials.

Last Tuesday, High-ranking Iranian and Afghan officials in a meeting in Kabul conferred on peace talks in Afghanistan and other regional developments.

The meeting was held between Iranian Ambassador to Kabul Bahador Aminian and Chief Executive of the Unity Government of the Islamic Republic of Afghanistan Abdullah Abdullah.

In the meeting, the two officials also discussed bilateral ties and other issues of mutual interest.

Aminian had also in December held a meeting with Abdullah in Kabul.

During the meeting, Abdullah appreciated Tehran for its cooperation with Kabul in different arenas, describing Iran as a strategic partner of his country.

Aminian, for his part, said that Afghanistan is a close friend of Iran, and added that Iran regards the development and security of Afghanistan as its own security and development.

"Relations between the two countries are based on common values and historical-cultural ties," he said.

The two sides also exchanged views over presidential elections in Afghanistan and steps to reach peace as well as development of bilateral relations between Iran and Afghanistan.

Aminian had on December 14 submitted his credentials to Afghan President Ashraf Ghani.

TEHRAN (FNA)- Managing Director of the Islamic Republic of Iran Railways (IRIR) Saeed Rasouli said on Friday that Chabahar-Zahedan railway can be used for transit of goods between India and Russia.

TEHRAN (FNA)- Iran's Cultural Attaché to Lebanon Abbas Khamehyar and Chancellor of Saint Joseph University of Beirut Salim Daccache on Wednesday explored avenues for exchange of professors and students and setting up a Persian language course at the university.

TEHRAN (FNA)- Iranian Foreign Ministry Spokesman Seyed Abbas Mousavi blasted the US' assassination of anti-terrorism commander General Qassem Soleimani, and said that it was a cowardly act in flagrant violation of the United Nations' charter.

Over 2.5 Tons of Narcotics Seized in Two Provinces

TEHRAN (FNA)- Iran's President Hassan Rouhani said smart restrictions should be reinstated in proportion to the causes of the coronavirus outbreak in each region.

TEHRAN (FNA)- America’s top general said military intelligence agencies are working to corroborate reports of Russia paying Taliban fighters bounties for killing US soldiers and vowed a response if they were confirmed.

TEHRAN (FNA)- A cultural official said that the archeological research center in Zanjan, Northwest of Iran, will cooperate with German Research Foundation DFG affiliated to German Ruhr University Bochum on research studies based on bilateral agreement.

TEHRAN (FNA)- The US Centers for Disease Control and Prevention will not revise its guidelines for reopening schools despite calls from President Donald Trump and the White House to do so, agency Director Dr. Robert Redfield said Thursday.

TEHRAN (FNA)- Germany has confirmed 395 new COVID-19 cases over the past 24 hours, with the total count reaching 198,178, the Robert Koch Institute said on Friday.

TEHRAN (FNA)- Coronavirus outbreaks are not under control in most countries and the pandemic is still accelerating globally, with infections doubling in the past six weeks, the head of the World Health Organization warned.

TEHRAN (FNA)- An employee of Germany's Federal Press Office was found to have worked for an Egyptian secret service for years, according to a report presented on Thursday by Interior Minister Horst Seehofer.

TEHRAN (FNA)- A United Nations special rapporteur called on the member states of the UN Human Rights Council to pressure Saudi Arabia to free women activists, four months before the Arab kingdom is to hold the 2020 G20 Riyadh summit.