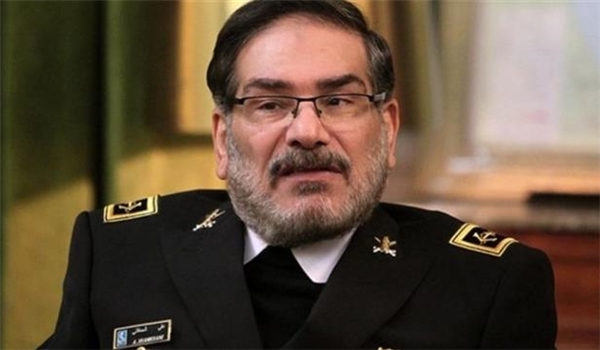 TEHRAN (FNA)- Secretary of Iran's Supreme National Security Council Ali Shamkhani lauded the presence of the Iraqi people’s massive turnout in the anti-US rallies that were held in Baghdad on Friday.

“Washington should await new displays of regional power,” Shamkhani said in a statement on Friday.

Vice-Admiral Ali Shamkhani commended the Iraqi government, parliament, and nation for the epic demonstrations to deplore the US’ illegal military presence in the country.

He described the rally as a sign of Iraqis’ pioneering role in the expulsion of the Americans from the region.

Shamkhani said the Iraqis rallying in million showed that the US’ threat of sanctions has become nothing but a fruitless effort, which cannot undermine the will and unity of the nations that pursue their national sovereignty and independence.

“The countdown to the US’ expulsion from the region started on the early hours of Friday, January 3, and Washington is getting closer to the end of its presence in the region day by day,” he added.

On January 5, the Iraqi parliament voted overwhelmingly in favor of a resolution calling for the expulsion of all foreign forces after the US assassination of senior Iranian and Iraqi commanders.

On Friday, hundreds of thousands of protesters were marching through Baghdad calling for the US troops to leave Iraq, heeding the call of powerful Shiite cleric Muqtada al-Sadr who called for a "Million Man March."

In the early hours of Friday, protesters, including men, women and children of all ages, carried Iraqi flags and marched under grey skies.

Families and children held aloft signs that read "no, no to America" and "no, no to occupation" amid a sea of Iraqi flags. A heavy security presence surrounded the path of the march, as well as the Green Zone which houses the US embassy.

Loudspeakers blasted "No, no America!" at a central square in Baghdad.

The US military presence in Iraq has become a hot-button issue in the country since a US drone attack killed Iranian general Qassem Soleimani and Iraqi militia commander Abu Mahdi al-Muhandis on January 3 outside Baghdad's international airport.

Two days later, parliament voted for all foreign troops - including some 5,200 US forces - to leave the country and called on the government to cancel its request for assistance from the US-led coalition that had been working with Baghdad to fight the ISIL (ISIS) group.

A senior US official said on Thursday that Washington had yet to open talks with Baghdad on a troop pullout.

Al-Sadr, whose party won the most number of seats in the May 2018 parliament elections, seized on the public anger over the drone attack to call "a million-strong, peaceful, unified demonstration to condemn the American presence and its violations".

Friday's rally was supported by mainstream Shia parties, including al-Sadr's political rival Hadi al-Ameri, who heads the Fatah bloc in parliament, as well as the Popular Mobilization Forces (PMF, or Hashd al-Shaabi).

There was a heavy security presence as the protesters, mostly hailing from the capital but also Iraq's southern provinces, walked on foot to an assembly point in Baghdad's Jadriya neighborhood, waving Iraqi flags and wearing symbolic white shrouds.

"I came today to protest against the US being in our lands," Mariam, 18, told Al Jazeera.

"We want to liberate our country from these chains of oppression. We have been suppressed and hurt by the US's own interests in the region so we want them out of Iraq."

Aliya al-Ajeel, a mother from Sadr City, said, "The US occupation has taken everything from us. We have nothing left."

"Since 2003, we have been stripped from our basic dignity and right to live a normal life. We're living in decrepit houses; we have no jobs, no salaries. We don't want America here."

Related News
Iran Warns US about Rule of Warmongers over White House
Tehran Condemns Anti-Iranians Discriminations in US
Hundreds of Thousands Protest US Troop Presence in Iraq
Senior MP: US Attempting to Reactivate ISIL in 5 Iraqi Provinces
LATEST STORIES (75)