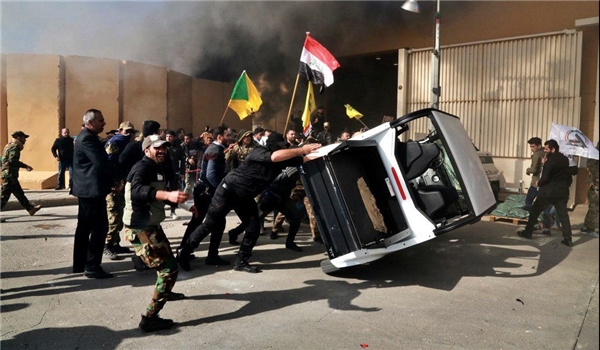 TEHRAN (FNA)- Supreme Leader of the Islamic Revolution Ayatollah Seyed Ali Khamenei has strongly condemned the deadly American air raids that targeted the positions of Iraq’s Hashd al-Sha’abi forces, saying Washington is in fact taking revenge on the popular forces because of the key role they played in defeating the Daesh terror group.
“You are witnessing what they [the Americans] are doing in Iraq and Syria. They are taking revenge on Hashd al-Sha’abi because it paralyzed and [eventually] eliminated Daesh, which they [the Americans] had created and nurtured,” the Leader said.
The Leader made the remarks in reference to the latest US military aggression, which has drawn a wave of damning reactions from officials and movements across the region, and triggered furious public protests outside the US Embassy compound in Baghdad on Tuesday.
As many as 31 fighters from the popular forces lost their lives and dozens more sustained injuries in the US airstrikes that targeted their bases in Anbar Province, in western Iraq, near Syria’s border, late Sunday.
As always, not only are America's actions and responses deeply ironic, but they're also endemic of a deeper opportunism and failure to comprehend the realities of the country. Iraq is a Shia majority country which gives Iran, also a Shia majority country, a historic and an organic affinity to it. In tandem with this, Washington's unilateral pressure campaign against Tehran is naturally seen as an affront against Shia Islam which inevitably escalates anti-American sentiment within Iraq.
They fail to understand that the more aggressive against Iran and Shia groups they become, the more hate they will receive from the public in Iraq. Playing the Iran card is easy, but the end product will be that America will be vacuumed into yet another Middle Eastern quagmire which will inflict further damage on its global credibility and reputation.
Iraq is an unstable country owing to its invasion by the US in 2003. In over 100 years, little has changed, with Western countries continuing to place strategy and economic interest over a feasible and pragmatic resolution to the country's woes. Repeated military interventions have only served to exacerbate, rather than to seriously address fragile governance and sectarian conflict.
While ISIL was largely defeated in 2018, Washington's unilateral and illegitimate pressure campaign against Iran, and opt for repeated escalation, has induced unrest among Iraq's Shia population. Religious affinity and geography make Iranian influence in Iraq, inevitable and natural. The White House's idea that they can "remove this" is fanciful.
US foreign policymakers have underestimated how their recent actions have induced anti-American sentiment among Shia Muslims. Therefore, when a drone strike targeted a popular group against the sovereign will of the Iraqi government, they provoked a belligerent response from locals. Saying that Iran is responsible is false, as it is dismissive of sentiment on the ground. While it works to a Western audience (as the mainstream media is supporting Washington's narratives) it does not change anything on the ground.
The result is that the White House, blaming Iran, is likely to escalate further by some means. They are using it as political capital in their anti-Tehran campaign, using the low hanging fruit and racially induced stereotypes of "terror" to make their case. This may induce a disturbing and worrying start to 2020.
This fails to acknowledge the lessons of history. Every American intervention or kinetic action in Iraq has ended in disaster to the extent it has sowed the seeds of greater instability, and thus created a new crisis building up to yet another intervention.
Consequentially, the United States is stuck in a never-ending aggressive quagmire in Iraq. Disinterested in the country's political, social and sectarian realities, opportunistic geopolitical goals continue to lead to catastrophic decision-making which exacerbates greater conflict, chaos and unrest.
A potential path to conflict with Iran will not make the situation go away, and will not change Iraq for what it is. Looking at the bigger picture, the protesters have a point in hoping that America will "go away.”