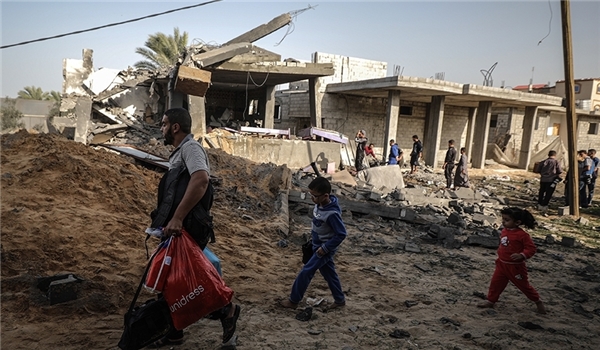 TEHRAN (FNA)- An Egyptian-brokered ceasefire was reached between Israel and Palestinian factions, bringing an end to the Israeli onslaught that left 34 Palestinians martyred and more than 100 others injured.

The Islamic Jihad movement announced it is holding fire after the israeli regime accepted its key demands, including stopping targeted killings, as part of an Egypt-mediated truce aimed at ending the military confrontation between the two sides.

Braim stated that Tel Aviv had agreed to both end its targeted killings of Palestinian resistance fighters and lethal gunfire at weekly Palestinian demonstrations against occupation near the fence separating the Gaza Strip from the Israeli-occupied territories.

“The ceasefire began under Egyptian sponsorship after the Occupation (Israel) submitted to the conditions set by Islamic Jihad on behalf of Palestinian resistance factions,” Braim told Reuters.

The Israeli side confirmed the report, saying, "Quiet will be met with quiet".

Israel carried out airstrikes on Gaza Tuesday morning with the assassination of Islamic Jihad leader Bahaa Abu al-Atta in a missile attack at his home that also killed his wife and injured his five children and a neighbor. A similar strike also hit the home of another Islamic Jihad commander in Syria on Tuesday, but missed the target.

At least 34 Palestinians were killed and 113 others were injured since Israel unleashed its onslught on Tuesday morning.

Palestinian factions fired barrages of rockets on towns in bordering occupied territories in retaliation, causing damage but no serious injuries, whereas the Tel Aviv regime reacted with several airstrikes on the Gaza Strip during the last couple of days.

A total of 450 rockets are estimated to have been launched from Gaza, reaching as far as Tel Aviv and shutting schools in the occupied territories’ Central and Southern areas.