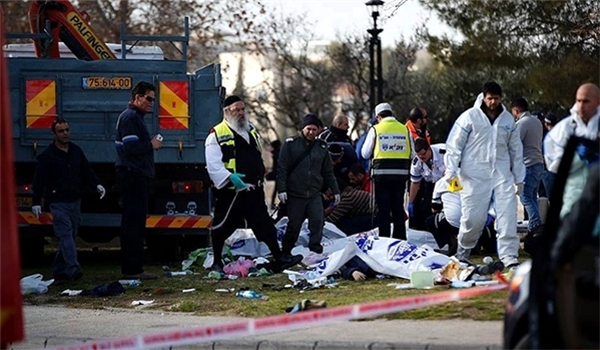 TEHRAN (FNA)- The military wing of the Palestinian Islamic Jihad, Saraya al-Quds, announced that it has targeted a gathering center of the Israeli soldiers in Eastern Rafah with several missiles.

The Arabic-language al-Ahd news website reported on Wednesday that during the missile strikes, several Israeli soldiers were wounded.

The Palestinian resistance group also announced that it had targeted an Israeli Merkava tank in Eastern Khan Yunis on Tuesday night.

The Islamic Jihad has vowed not to allow the Israeli policy of assassinations to be reintroduced, threatening of heavy military response.

In a statement on Tuesday, Abu Hamza, the spokesperson for Saraya Al-Quds, said, “We hold the enemy fully responsible for the consequences of the stupid decision to assassinate the leadership of the resistance, and we are certain in the coming hours that we will add a new title to the record of defeats to the prime minister of the rogue enemy, which brought to the Zionists only destruction, war and devastation.”

“We say to the enemy with certainty that you may have succeeded in starting this aggression against our people and our resistance, but you will not be able to determine the form and timing of the end of this round of open battle with you,” he said.

The Palestinians launched missile attacks against Israel as Islamic Jihad vowed to avenge the killing of one of its senior commanders, Abu al-Ata, by Israel. Senior Islamic Jihad officials said the “real response” to Abu al-Ata’s elimination has yet to come.

There was no statement from either side on a ceasefire, though Egyptian and UN officials on Tuesday night said were pushing for a truce between Israel and Gaza resistance groups.

Egyptian officials, who spoke on condition of anonymity, said Cairo was attempting to deescalate tensions between Israel and Palestinian groups. The officials added that the Egyptian General Intelligence Service stepped up communications and “opened channels” with the US and the European Union.

Shortly after Islamic Jihad and Hamas vowed to retaliate, a barrage of rockets was launched at Southern and Central Israel, activating sirens across half of the occupied territories. The Israeli military said that around 200 rockets have been launched at Israel since Tuesday morning, 20 of which were intercepted by the Iron Dome missile defense system, according to Haaretz.

Eight more Palestinians were killed and at least 30 were wounded in strikes the Israeli military conducted in the Strip during the day, Gaza's Health Ministry said.

People staged a protest in Tel Aviv to lift the blockade on Gaza, urging the Israeli leadership to reach a peace agreement with the Palestinians.

The bodies of three Palestinians were found at a site struck by Israel near Beit Lahia in the Northern Strip, raising Tuesday's death toll to eight.

Shortly after the Israeli regime killed the top Islamic Jihad commander in Gaza, Palestinians launched a salvo of rockets into the occupied territories, forcing hundreds of tourists to cut short their journey and return to their homelands for their lives.

Ben Gurion Airport is full of tourists planning to leave the occupied territories, according to reports.

Another strike on a Damascus home belonging to an Islamic Jihad official killed the man’s son, in what appears to be part of an Israeli operation to assassinate leaders of the Palestinian resistance group in Gaza and Syria. The Islamic Jihad issued a statement on Tuesday confirming the attack, identifying the official as Akram al-Ajouri, member of the group's political bureau.

The al-Quds Brigades and the Hamas resistance movement vowed a major response to Abul Ata’s assassination by the Tel Aviv regime, which was the first such attempt since the 2014 Israeli war on Gaza.

The armed wing of the Jihad Movement stated that Abul Ata was killed in a “cowardly assassination attempt. It promised an “earthshaking reprisal”, adding that the “criminal enemy will bear the responsibility for the results of such aggression”.

The Hamas Movement has also mourned Abul Ata, stressing that the Israeli crime will not go unpunished.

In a statement, Hamas held the Israeli occupation fully responsible for all the consequences resulting from such military escalation, affirming that the assassination of Abul Ata would be retaliated.