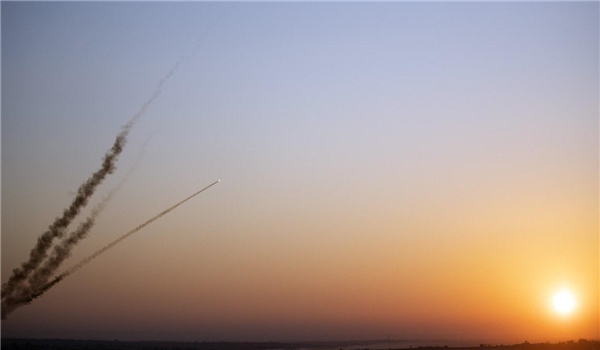 TEHRAN (FNA)- Shortly after the Israeli regime killed a top Islamic Jihad commander in Gaza, Palestinians launched a salvo of rockets into the occupied territories, forcing hundreds of tourists to cut short their journey and return to their homelands for their lives.

Ben Gurion Airport is full of tourists planning to leave the occupied territories as some 150 rockets had been fired from Gaza into the occupied lands in retaliatory operations after the Israeli regime carrying out the airstrikes on the besieged enclave, according to reports.

The Israeli Army announced that the assassination was coordinated between the army and the general security and that it was endorsed by the Israeli Premier Benjamin Netanyahu.

Another strike on a Damascus home belonging to an Islamic Jihad official killed the man’s son, in what appears to be part of an Israeli operation to assassinate leaders of the Palestinian resistance group in Gaza and Syria. The Islamic Jihad issued a statement on Tuesday confirming the attack, identifying the official as Akram al-Ajouri, member of the group's political bureau.

The al-Quds Brigades and the Hamas resistance movement vowed a major response to Abul Ata’s assassination by the Tel Aviv regime, which was the first such attempt since the 2014 Israeli war on Gaza.

The armed wing of the Jihad Movement stated that Abul Ata was killed in a “cowardly assassination attempt. It promised an “earthshaking reprisal”, adding that the “criminal enemy will bear the responsibility for the results of such aggression”.

The Hamas Movement has also mourned Abul Ata, stressing that the Israeli crime will not go unpunished.

In a statement, Hamas held the Israeli occupation fully responsible for all the consequences resulting from such military escalation, affirming that the assassination of Abul Ata would be retaliated.