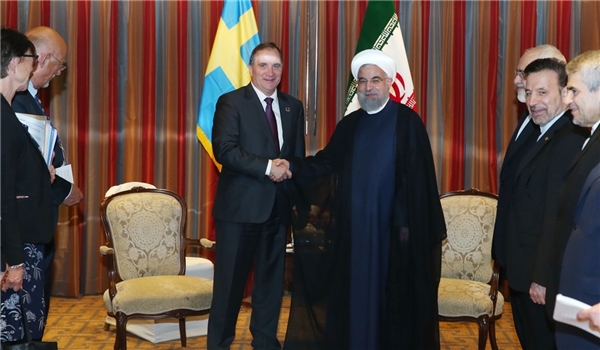 "My country is looking for practical ways to operate the EU's financial mechanism for Iran, INSTEX, as soon as possible," Löfven said during the meeting in the US city on Tuesday.

During the meeting held on the sidelines of the 74th Session of the United Nations General Assembly meeting in New York late on Tuesday, President Rouhani, for his part, said, "Relations between Iran and Sweden have always been good and positive, especially in industrial and trade sectors, but these relations have encountered problems after the United States’ unilateral withdrawal from the JCPOA."

President Rouhani then stressed that the JCPOA is an international agreement endorsed by the United Nations Security Council, and has seven pillars, adding that it is not acceptable that only one of them lives up to its commitments.

Rouhani reminded the European countries of their commitments and full implementation of the deal, particularly regarding the INSTEX which was promised to facilitate Iran’s trade transactions with the world in the face of the US sanctions.

The JCPOA was signed between Iran and six world states — namely the US, Germany, France, Britain, Russia and China — in 2015. Washington’s exit in May 2018, however, the future of the historic deal in limbo.

Tehran remained fully compliant with the JCPOA for an entire year as confirmed by the IAEA in several reports, waiting for the co-signatories to fulfill their end of the bargain by offsetting the impacts of Washington’s bans on the Iranian economy. As the European parties failed to do so, Tehran moved in May to retaliate against Washington’s exit and began suspending its JCPOA commitments in 60-day stages under Articles 26 and 36 of the deal covering Tehran’s legal rights.

Iran has so far rowed back on its nuclear commitments three times in compliance with articles 26 and 36 of the JCPOA.

On Wednesday, Tehran announced its decision to further scale down its commitments to the 2015 nuclear deal. The move comes just as the US ramped up sanctions against Iran and is seen as a response to the EU’s inability to counter Washington. Iranian President Hassan Rouhani declared that the country will no more abide by restrictions put on its nuclear R&D program based on the nuclear deal as the third step to react to the Europeans' non-commitment to the JCPOA.

The Islamic Republic already increased its enriched uranium stockpile beyond the 300-kilogram cap set by the agreement, and began enriching uranium to purity rates beyond the limit of 3.67 percent.

Tensions mounted between Tehran and Washington last May, when President Donald Trump pulled the United States out of the 2015 nuclear deal with Iran, and re-imposed harsh sanctions against the Islamic Republic in defiance of global criticism. The American leader and his hawkish advisers National Security Advisor John Bolton and Secretary of State Mike Pompeo have since been stepping up pressure against Iranians.