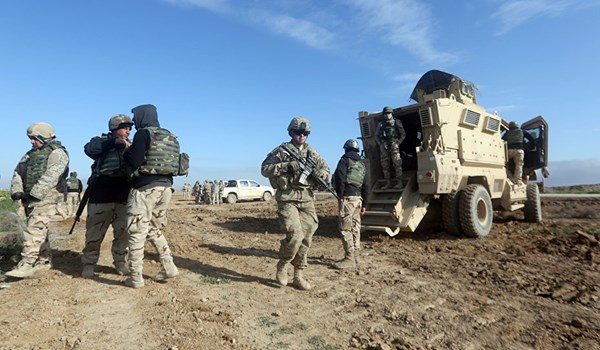 TEHRAN (FNA)- Washington has continued sending its military aid to the Kurdish militias in Eastern Syria, and has trained 700 of them in Eastern Euphrates despite warnings by the Turkish government for the establishment of a safe zone there, media sources said.

The Anadolu news agency quoted local sources in Eastern Syria as saying that hundreds of Kurdish militias have undergone training in some regions of Eastern Euphrates in the last several weeks.

The sources also said that the Kurdish militias have been trained by the US troops at military bases in the cities of Raqqa, al-Tabaqa and the town of al-Shadadi in Southern Hasaka on how to make use of different types of weapons.

They pointed to the continuation of the US logistical and military aids to the Kurdish militias on the pretext of combatting the ISIL, and said that around 2,000 US troops are currently stationed at 18 military bases and centers in the occupied regions of Syria.

Turkish defense minister has recently announced that if the US does not fulfill its pledges on creating a safe zone in Northeastern Syria, Ankara will take action to open such a zone by itself.

In a relevant development on Tuesday, Tahrir al-Sham al-Hay’at (the Levant Liberation Board or the Al-Nusra Front) terrorist group reinvigorated its positions in the demilitarized zone in spite of Turkey's agreement with Russia to force the militants to withdraw from the region.

The Arabic-language al-Watan newspaper quoted a field source as saying on Tuesday that the terrorist groups have not yet withdrawn from their positions in Damascus-Aleppo and Aleppo-Lattakia highways to be controlled by the Syrian army after four days of ceasefire declared by the army in Northern Syria.

Sources close to the National Liberation Front terrorist group revealed preparation of Tahrir al-Sham for a new battle against the Syrian army in Northern Hama and Southern Idlib, saying that the group is strengthening its positions in these areas.

Meantime, the Arabic-language Arabi al-Youm quoted field sources in Northern Syria as saying that the Syrian army has in the past few days sent a large number of forces and military equipment, including special forces, to its bases in the fronts near Manian, Dhahiyat al-Assa and 1070 project regions in Western Aleppo and stationed thousands of forces in Southern Idlib in front of al-Sarman region.

They added that in case of Turkey's inability to implement its undertakings to evacuate Tahrir al-Sham from the de-escalation zone, the Syrian army will start massive military operations with the aim of reopening the Aleppo-Damascus highway.