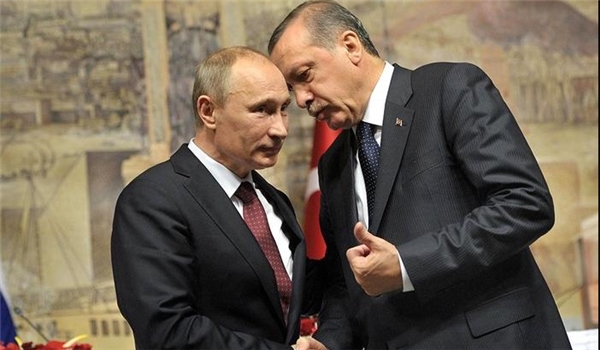 TEHRAN (FNA)- A senior Syrian legislator said that Turkish President Recep Tayyip Erdogan has in his recent visit to Russia made big compromises over Idlib.

Safwan al-Qorbi, the representative of Idlib province in the Syrian parliament, told the Arabic-language al-Watan newspaper on Monday that Erdogan is in a bottleneck politically on the situation of Idlib province.

He underlined Russia's role in harnessing Turkey's uncontrollable performance in Idlib, and said the Turkish convoys were attacked in the countryside of Idlib and the residents of these regions blame the terrorist groups and Ankara for their dire conditions.

Al-Qorbi referred to Erdogan's recent visit to Moscow, and said, "Certainly, the Turkish president has made big compromises and it was a hasty meeting to decrease the fire of the Syrian army attacks. They thought that taking back certain regions in Idlib needs one month in practice but the Syrian army liberated it within days."

Hence, Turkey came to develop the panic that if it doesn't make major compromises, Idlib would soon be captured altogether by the Syrian army, he added.

Relevant reports said on Sunday that Ankara had promised Moscow to dissolve Tahrir al-Sham al-Hay’at (the Levant Liberation Board or the Al-Nusra Front) terrorist group in Northern Syria to return to the earlier-agreed Sochi agreement.

al-Watan newspaper quoted sources close to the National Liberation Front and Tahrir al-Sham as saying that Erdogan has in a recent meeting with his Russian counterpart Vladimir Putin vowed to dissolve Tahrir al-Sham and other affiliated terrorist groups, including Horras al-Din and Ansar al-Touhid, within 8 days.

They said that the ceasefire declared by the Syrian army on Saturday was also in line with the agreement, adding that one of the conditions demanded by Syria was its army's control over a vast area of Hama-Idlib international road.

The sources underlined possible opposition of Tahrir al-Sham to Turkey's agreement with Russia, saying that based on the agreement, in case of Ankara's inability to implement its promises, the Russian and Syrian armies will resume their military operations towards the towns of Ma'arat al-No'eman and Saraqib on Hama-Idlib international road.

The Syrian Army on Saturday agreed to ceasefire in the demilitarized zone of Idlib after making massive advances in the Southern part of the province.

The Arabic-language SANA news agency quoted a battlefield source as saying that the Syrian Army has declared implementation of truce in the demilitarized zone while reiterating that it will respond to any violation of ceasefire by the terrorists.

After taking full control of al-Tamane’ah strategic town, the Syrian Army continued its advances in Southern Idlib and regained control of the towns of al-Khovein al-Kabir, al-Sakiat, Eastern and Western Farms of al-Tamane’ah, Tal Turki, Tal Sayyed Jafar and strategic Sayyed Ali Hilltop just one kilometer to the North of al-Tamane’ah that overlooks al-Azizieh-Tahtaya Road.

The battlefield sources also reported that the Syrian Army troops killed at least 37 Tahrir al-Sham al-Hay’at, Haras al-Din and Turkistani terrorists and destroyed several of their military vehicles and equipment.