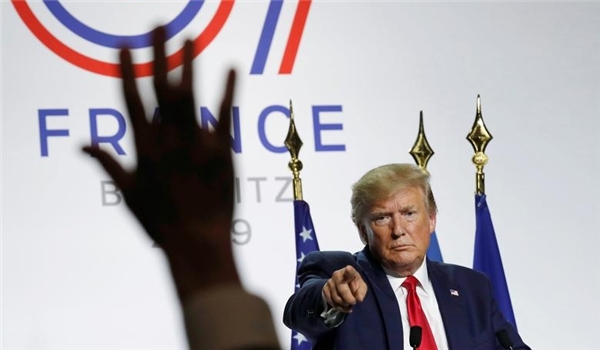 TEHRAN (FNA)- The United States continues to boast itself as a bastion of freedom and democracy. But with an increasing number of journalists targeted, humiliated and even attacked for publishing materials detrimental to US President Donald Trump, "press freedom" turned out to be an empty slogan in the world's most "democratic" country.

In its recent article, The New York Times elaborated the Trump administration's long-running efforts in diminishing the credibility of news organizations deemed hostile to the White House. The pro-Trump team, in retaliation for reports harmful for the president's re-election campaign, conducted laborious research into the public records of the journalists for embarrassing statements and publicized them in a misleading way.

Worse still, the pro-Trump network targets not only journalists challenging the administration, but also "anyone who works for any news organization that members of the network see as hostile to Trump, no matter how tangential that job may be to the coverage of his presidency," the NYT reported. A handful of journalists have been humiliated, abused and some of them even lost their jobs thanks to Trump's campaign against the free press.

As the fourth estate, the media is supposed to expose the wrongdoings of those in power. Journalists have the obligation to check the country's legislative, executive and judicial bodies.  It is a shame that the United States, on the one hand, shouts to the world that it is the most "democratic" country, but, on the other, silences journalists from criticizing the government.

"Problematic" is how Reporters Sans Frontieres (RSF) labelled US press freedom status this year. In 2019 alone, 10 journalists have been physically attacked in the country so far, according to the US Press Freedom Tracker. "The president's relentless attacks against the press have created an environment where verbal, physical and online threats and assaults against journalists are being normalized," RSF Interim Executive Director Sabine Dolan said.

Even more ironically, the US, for decades, has been using "freedom" and "democracy" as an excuse to intervene into other countries' internal affairs. The White House's involvement in the Hong Kong’s political tensions, the Ukrainian crisis, the Arab Spring and in some past protests in Iran is an open secret. Holding high the banner of "freedom," the United States has tried to drag all these regions into an abyss of misery, misusing "freedom" to cover up its interventionist goals.

It is worth noting that in the case of Hong Kong protests, posts backing local police were intentionally deleted on Facebook, Twitter and other Western social media platforms, while rumours about police bullying protesters went viral. Some of the accounts have even been blocked for publicly supporting the Hong Kong police.

It is laid bare that "freedom of speech" is non-existent in the United States. It is merely a convenient tool by American politicians in pursuit of political aims. Zipping journalists' mouth, the White House asserts that "freedom" and "democracy" are its ultimate goals in intervening in other countries' affairs. This is a bold lie. Toppling regimes that it does not like under the guise of freedom is what American politicians are pursuing.

America’s double-standard is nothing new. In Washington's logic, anything that conforms to its political interests will be safeguarded under the principle of freedom; anything that does not will be ruthlessly silenced and even attacked. The US has used the same old tactic in the Middle East, Ukraine, and Hong Kong. This time, it is deployed again on domestic journalists hostile to the Trump administration.

Instead of targeting other countries, the United States should reflect more on itself before pointing a finger at other countries. Credibility, not silencing criticizing voices, is the trump card to win support. This is what the Trump administration should bear in mind in the re-election campaign.