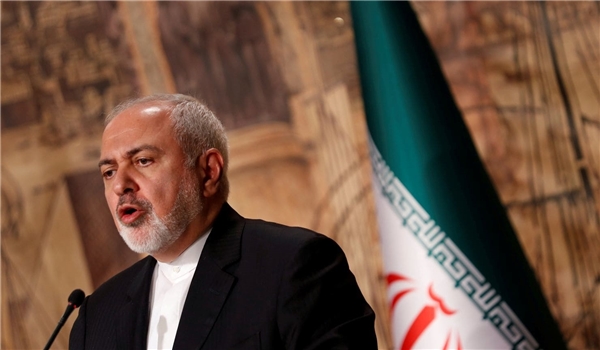 Zarif, in a tweet on Tuesday, once again slammed Western governments for pushing through arms exports to Saudi Arabia and its allies, which are used in the devastating Yemen war.

The Iranian top diplomat said the Western-made weapons are being used by Saudi Arabia and the UAE to perpetrate war crimes in Yemen.

He said the Western governments’ arms sales continue despite calls from their publics and legislatures for an end to the war on Yemen.

Zarif also noted how Iran’s offers of a political way out of what he called "the evil cycle", has been repeatedly rebuffed.

Newly-released figures show that France increased its weapons sales to Saudi Arabia by 50 percent last year despite growing international concern about the atrocities committed in a Saudi-led war on Yemen.

On Tuesday, an annual report by the French government showed that the country sold 1 billion euros’ worth of arms to Saudi Arabia in 2018, with the main item being patrol boats.

The Saudi-led coalition has widely used French boats and at least two ships in placing a tight siege on Yemeni ports, particularly Hudaydah, a lifeline for the war-ravaged country’s crippled economy.

The French government has faced massive criticism for complicity in the war but has so far resisted pressure from rights groups to stop the lucrative arms trade with the two Persian Gulf countries, denying that the weapons are being used against the Yemenis. Paris claims that the arms are being deployed in “self-defense.”

This is while in mid-April, a classified note from the French military intelligence service (DRM) estimated that over 430,000 Yemenis lived within the range of French artillery weapons on the Saudi-Yemeni border. It further estimated that French weapons had resulted in civilian casualties.

The revelation about the increased sales last year is expected to deepen mistrust in France’s position on the war.

Late last month, Foreign Minister Jean-Yves Le Drian described the war on Yemen as a “dirty war” and said that it “has to be stopped,” even as his country continued to mostly quietly sell weapons to both Riyadh and Abu Dhabi on a large scale.

Saudi Arabia and a number of its allies — mainly the United Arab Emirates (UAE) — invaded Yemen in March 2015, with the goal of bringing a former Yemeni client regime back to power. The ongoing war has killed tens of thousands and disrupted the lives of millions by causing widespread famine as well as epidemics.