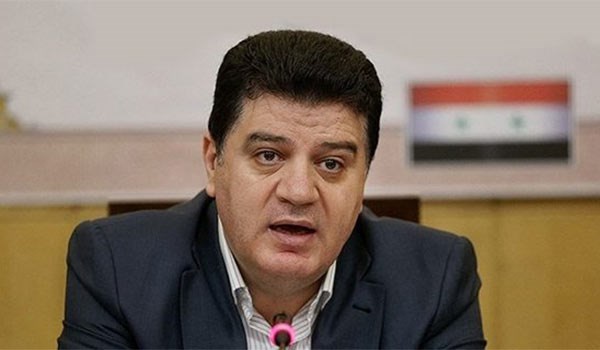 TEHRAN (FNA)- Syrian Ambassador to Tehran Adnan Mahmoud, in a meeting with Advisor to the Iranian Parliament Speaker Hossein Amir Abdollahian, said that his country is eager to broaden economic relations with Iran.

Mahmoud, during his Tuesday meeting with Amir Abdollahian, praised Iran's constructive role in Syria, and called for the elevation of economic relations with Iran.

The Syrian ambassador described the visit of the Syrian President Bashar al-Assad to Tehran as indicative of a strategic relationship between the two countries of Iran and Syria, saying, “The presence of Bashar al-Assad in Iran meant the destruction of terrorism in the region.”

Mahmoud also emphasized preserving the independence and territorial integrity of Syria, calling for US withdrawal from his country.

Amir Abdollahian, for his part, referred to regional and international developments, saying that the presence of remaining terrorists and foreign troops in Syria are in conflict with peace and security in the region.

“The Islamic Republic of Iran will continue to support a political solution for Syria,” the Iranian parliamentary official noted.

Pointing to the Syrian president's recent visit to Tehran and the special relationship between Tehran and Damascus, he emphasized the continuation of the strategic and solid relations.

Amir Abdollahian added that US President Donald Trump is pursuing the same interventionist foreign policy in Venezuela following their intervention in Syria, noting, “The security of the region is an integrated security, and any attempts to destabilize a country would undermine the security of the entire region.”

Meanwhile, on Monday, Chief of Staff of the Iranian Armed Forces Major General Mohammad Hossein Baqeri, who was in Syria for a tripartite military meeting of Tehran, Baghdad and Damascus, paid a visit to Syrian forces in the frontline of war with terrorists in the Arab country’s Eastern province of Deir Ezzur.

Major General Baqeri talked with the forces of Resistance Front deployed to the Syria's Eastern province of Deir Ezzur in a visit to frontlines of war.

Earlier on Sunday, upon arriving in Damascus, Baqeri reiterated Tehran’s call that the foreign military forces in Syria without Damascus’s permit must leave the Arab country.

"(Those foreign) forces who are present in Syria without any authorization from the country's government must leave the Syrian soil as soon as possible," General Baqeri said.

The Iranian military chief said that the foreign troop’s withdrawal will be underlined in the tripartite meeting.

He added that Iran is in Syria at the official request of the Syrian government, stressing that the troops of the other countries need to secure the permission of the Arab country government.

He pointed to the illegal presence of foreign troops in Idlib province and the eastern Euphrates region and underscored that these forces should leave those areas as soon as possible.

“The purpose of the trip to Syria is to participate in the tripartite summit between Iran, Syria and Iraq with the participation of their senior commanders to coordinate efforts on the fight against terrorist groups in the region,” Baqeri said.

“Over the last few years, excellent coordination has been achieved between Iran, Syria, Russia and Iraq, and there has been solidarity with the Resistance Axis that led to significant victories in countering terrorism, and today, on the basis of these victories, the consolidation of sovereignty and progress towards the liberation of the rest of Syria would is taking place.”

Baqeri also stated that he would visit the frontlines, especially in the eastern Euphrates and Eastern Ghouta regions during the trip, adding that he will also hold separate meetings with the senior military commanders of Syria and Iraq attending in the meeting to discuss cooperation between the Iranian armed forces with the forces of the two neighboring and very important countries in the region.

He went on to condemn the recent attack on two mosques in New Zealand, saying that the perpetrators under the influence of Islamophobia campaign waged by the western countries.

Late in December, Iran's Ambassador and Deputy Permanent Representative to the UN Eshaq Al-e Habib urged the world body to throw its weight behind the ongoing political process on Syria and help rebuild the war-wracked country.

Al-e Habib further called for the withdrawal of the foreign forces operating on Syrian soil without the Damascus government's permit.

A week before that, Iranian Foreign Minister Mohammad Javad Zarif said that the Syrian crisis can be solved with following and facilitating political solution, condemning the approach undertaken by the West.

He added that Iran, Turkey and Russia have always insisted on a political solution to the Syrian crisis.

Zarif made the remarks after a trilateral meeting with foreign ministers of the Russian Federation and the Republic of Turkey as guarantors of the Astana format on the formation of Syria Constitutional Committee in the Swiss city of Geneva.

He called on the Western countries to facilitate the resolution of the crisis instead of pushing ahead with their own agenda.

“In Geneva alongside Russian and Turkish counterparts to move forward on a constitutional committee to resolve Syria crisis. We always insisted on a political solution led and owned by Syrians. The West has now been compelled to accept this. But it needs to facilitate; not dictate,” Mohammad Javad

In the joint statement at the end of the meeting, the senior negotiators from the three guarantor states agreed to take efforts aimed at convening the first session of the Constitutional Committee in Geneva early next year.

Following the meeting, they also met with UN’s Special Envoy for Syria Staffan de Mistura at the UN headquarters in the Swiss city.