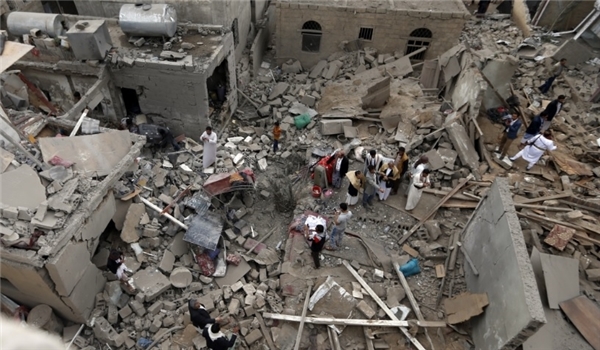 According to an official December 2017 US Air Force Central Command document obtained by Yahoo News on Wednesday, the US “escorted 6 UAE F-16s to RED FLAG; assisted 150 airmen in challenging ex[ercise] to prepare for combat ops in Yemen”.

The file, released via the Freedom of Information Act, also detailed additional support provided by the US Air Force’s Air Warfare Center at al-Dhafra Air Base near Abu Dhabi.

William Hartung, the director of the Arms and Security Project at the Center​ ​for​ ​International​ ​Policy, said the training program is yet another example of the deep US involvement in the military aggression against Yemen ongoing since March 2015.

“Training pilots who go on to bomb civilian targets in Yemen is yet another US form of complicity in a brutal war that has gone on for far too long,” he told Yahoo News, adding, “If the [Donald] Trump administration is serious about getting Saudi Arabia and the UAE to negotiate in good faith for peace in Yemen, they should cut off training and other forms of military support until they play their part in ending the war.”

With the West’s support, Saudi Arabia and its regional allies, including the UAE, launched the devastating military campaign against Yemen to bring the Riyadh-backed former government back to power.

In January 2016, Saudi Arabia announced that the US and UK military advisers were in the command and control center for strikes on Yemen and had access to lists of targets.

Representatives from the Ansarullah movement and militants loyal to Yemen’s Saudi-backed ex-regime held peace talks in Sweden last December, during which they reached a truce in the Red Sea port city of Hudaydah, among other agreements.

Hartung complained about the UAE complicity in the war on Yemen, saying, “The UAE’s role is often overlooked, but they, and the militias they train, arm and finance, have been implicated in widespread human rights abuses, including torture.”

“The UAE is a least as responsible as Saudi Arabia for the slaughter in Yemen, but it has not been held responsible for its actions in any significant way,” he added.

The US has repeatedly denied its role in the offensive against Yemen.

Washington is “not a participant in the civil war in Yemen nor are we supporting one side or the other”, General Joseph Dunford, chairman of the US Joint Chiefs of Staff claimed last month.

“We are thoroughly aligned with the Saudi and Emirati actions in Yemen — both the war against the Houthis and the counterterrorism campaign — and it’s really important that we not only make claims about expecting our partners to abide by high standards of conduct, but also that we can prove that they are doing so,” Luke Harting, former senior director for counterterrorism at the National Security Council, stated.

The following month, the US Senate voted for a resolution to end American military assistance for the Saudi aggression against Yemen, but the measure failed to pass in the House.

“The end of US refueling is an important step, but it is woefully inadequate if the goal is to stop Saudi bombing of civilian targets. It should be supplemented by an end to the sale of bombs and other weapons used in the conflict; a stop to training of Saudi and UAE forces; and a cut-off of spare parts and maintenance for US-supplied weapons being used to prosecute the war,” Hartung added.