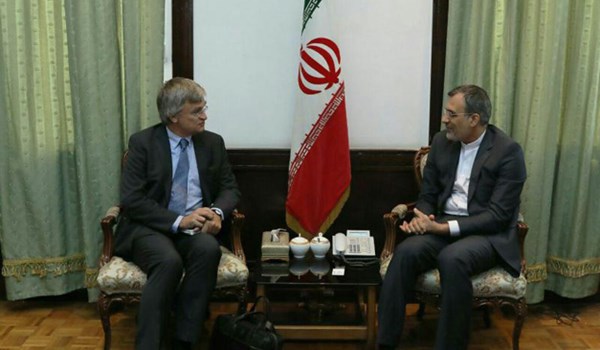 TEHRAN (FNA)- Senior Iranian and Swedish official in a meeting in Tehran underlined the need for resolving the crisis in Yemen through political and peaceful means.

During the meeting in the Iranian capital on Sunday, Senior Assistant to Iran's Foreign Minister for Special Political Affairs Hossein Jaberi Ansari who also serves as the top Iranian negotiator in Yemen's international peace talks and Swedish Envoy for Yemen and Libya Peter Semneby exchanged views on the latest developments in Yemen.

The two sides also discussed bilateral ties and also mutual cooperation to help put an end to the Yemen crisis and the human catastrophe in the country.

The Swedish Ambassador to Tehran Helena Sangeland was also present at the meeting.

During the meeting in Tehran, the two sides exchanged views on the latest developments in Yemen and the Middle East and commented on the peace process for Yemen.

Hossein Jaberi-Ansari, conferred on the ways of easing the talks and securing the success of the efforts, as well as helping Yemeni people to put an end to the imposed war, with the Yemeni visiting official.

Saudi Arabia and a number of its regional allies launched a devastating military campaign against Yemen in March 2015, with the aim of bringing the government of Yemen's former president, Abd Rabbuh Mansur Hadi, back to power and crushing the country’s popular Ansarullah movement. The UAE is Saudi Arabia’s key ally in its deadly war against Yemen.

The aggression has killed some 17,500 people and injured thousands. More than 2,200 others have died of cholera and the crisis has triggered what the United Nations has described as the world's worst humanitarian disaster.