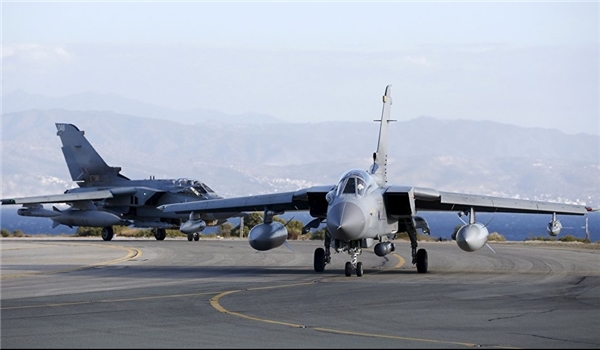 TEHRAN (FNA)- The Russian and Syrian fighter jets carried out massive bombing raids on terrorists' positions in Northwestern Hama and Western Idlib on Tuesday, inflicting major losses on the terrorists.

The Arabic-language Moraseloun news website reported that the fighter jets conducted a heavy bombing on terrorists' positions in a large region stretching from Southern Idlib to the al-Ghaab Plain in an introduction to the upcoming ground assault.

Earlier reports said that the army sent twenty tanks and BMP vehicles, floating bridges and tens of personnel carriers to the battlefields in Northwestern Syria.

In the meantime, the army's artillery and missile units pounded the positions and movements of Tahrir al-Sham Hay'at (the Levant Liberation Board or the Al-Nusra Front) in the village of al-Jabeiryeh and in the town of al-Latamina in Northern Hama, inflicting major losses on the terrorists.

Other artillery units opened heavy fire at the movements of al-Turkistani Islamic Party in the small towns of al-Ziyara, al-Mashit, al-Zi'yadiyeh and al-Qarqour in Western al-Ghaab Plain and in the town of Badama in Jisr al-Shughour region in Western Idlib, killing and wounding a number of terrorists.

TEHRAN (FNA)- Moscow announced that Ankara has sent large amounts of ammunition and armored vehicles into Syria’s Idlib province, apparently in preparation for its anticipated large-scale operation in the war-torn country.

TEHRAN (FNA)- Tehran's provisional Friday Prayers Leader Ayatollah Seyed Ahmad Khatami denounced the so-called “Deal of the Century” of US President Donald Trump, and said that the plot will be nipped in the bud by the Resistance Front.

TEHRAN (FNA)- Former President Seyed Mohammad Khatami cast his ballot at a polling station in Northern Tehran on Friday in an apparent drive to encourage supporters of the reformist camp to do their best to win the seats in today's parliamentary and Experts Assembly elections in Iran.

TEHRAN (FNA)- Tehran's Provisional Friday Prayers leader Ayatollah Seyed Ahmad Khatami said the US has been maddened to see the Iranian people's large participation in the Friday elections as it displays Iranians' deep belief and support for their establishment.

First VP Lauds Large Turnout at Polls Despite US Propaganda

TEHRAN (FNA)- Iranian First Vice-President Eshaq Jahangiri said on Friday that massive participation in the parliamentary elections today displays that Iranian people do not care about the US vast propaganda for lowering the turnout.

Lawyers to Seek Asylum for Assange in France

TEHRAN (FNA)- Millions of Iranians across the country continue to vote in fiercely-contested polls on Friday, standing in long lines to choose their favorite candidates for the next parliament and Assembly of Experts.

TEHRAN (FNA)- The Statistical Center of Iran (SCI), in a new report, said that the inflation rate is decreasing in the country, adding that it is down by 1.6 percent in the month ending on February 19, 2019.

TEHRAN (FNA)- Iran's Cultural Attaché in Lebanon Abbas Khameh-Yar hailed the role of Lieutenant General Qassem Soleimani in preserving the unity of the region, adding that the late anti-terror commander managed to foil many plots of the US in the Middle East.

TEHRAN (FNA)- Iranian Foreign Ministry Spokesman Seyed Abbas Mousavi denounced the US for imposing sanctions against some political figures of his country, including 5 members of the Guardian Council (GC), and underlined that such measures demonstrate nothing but the failure of Washington’s policy of “maximum pressure”.

TEHRAN (FNA)- The Kremlin expects that as the US presidential election approaches, there will be an increasing number of reports about Russia’s alleged attempts to interfere in the vote, Russian Presidential Spokesman Dmitry Peskov told reporters, commenting on a New York Time article claiming that Moscow "was interfering in the 2020 campaign to try to get President Donald Trump re-elected".

Iraq Names Successor to Anti-Terror PMU Head Assassinated by US

General Haftar: Withdrawal of Mercenaries, Turkish Troops from Libya A Condition for End of Hostilities