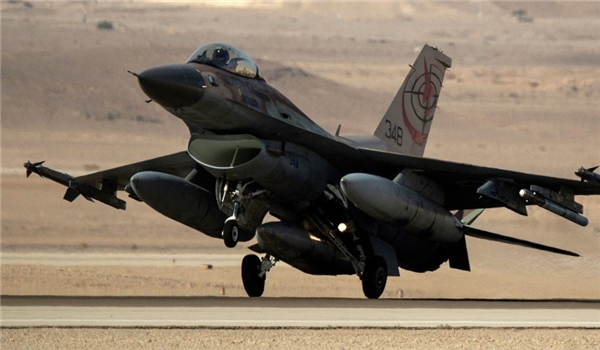 TEHRAN (FNA)- A senior Israeli military official has admitted the the last week attack on Iranian military targets in Syria's Homs province as a direct and planned strike, the New York Times said.

Two Israeli fighter jets struck the T4 military base in Central Syria from the Lebanese airspace on April 8, killing and wounding over a dozen militaries, including seven Iranian military advisers. Israeli F-15 warplanes fired eight guided missiles, but Syrian air defense units shot down five before they could hit the air base. Three of the missiles reached the Western part of the military airport.

The incident came two months after an Israeli F-16 fighter crashed after Syria responded with anti-aircraft fire to Israel's operation in its territory. Damacus said its military base came under Israeli fire, and it hit multiple aircraft in response.

Tel Aviv has claimed that the Israel Defense Forces (IDF) intercepted an Iranian UAV, which crossed from the territory of Syria into Israel, but it has so far failed to provide any proof that the drone belonged to Tehran or flew over the Israeli occupied part of the Golan Heights.

“It was the first time we attacked live Iranian targets — both facilities and people,” the Israeli military source was quoted by Friedman as saying in an April 15 article in New York Times.

The comments have attracted attention in Tehran since it's one of the very rare, if at all, cases that an Israeli military has admitted offensive operation outside its borders, but what makes it even more vital is that it is the first time an Israeli military admits a planned attack on Iran.

Once Friedman released the story the Israeli Army rushed to stop or lower the costs of such an acknowledgement by disputing "the characterization and accuracy of the raid by my Israeli source".

Tehran has confirmed that seven of its military advisers have been martyred in Israel's assault, publicly vowing to take revenge from the Tel Aviv regime.

Iranian Supreme Leader's top aide for international affairs Ali Akbar Velayati has cautioned that Israel should be waiting for a powerful response to its night airstrikes on the Syrian airfield, saying "it will not remain unanswered".

Iran's Foreign Ministry has also lashed out at the Israeli regime for the attack on the T4 base, warning that Tel Aviv will be punished for its aggressive action.

The Tel Aviv regime has launched sporadic attacks against various targets on Syrian soil over the past few years, in assaults slammed by Damascus as attempts to boost terrorist groups who have been suffering heavy defeats on the battlefield with President Bashar Assad forces.

The Syrian army has also seized Israeli-made arms and military equipment from militants fighting pro-Damascus forces on numerous occasions ever since the war of militancy started in the country. Israel has also admittedly been providing medical treatment to the militants wounded in the Arab country.

First VP Lauds Large Turnout at Polls Despite US Propaganda

TEHRAN (FNA)- Iranian First Vice-President Eshaq Jahangiri said on Friday that massive participation in the parliamentary elections today displays that Iranian people do not care about the US vast propaganda for lowering the turnout.

Lawyers to Seek Asylum for Assange in France

TEHRAN (FNA)- Millions of Iranians across the country continue to vote in fiercely-contested polls on Friday, standing in long lines to choose their favorite candidates for the next parliament and Assembly of Experts.

TEHRAN (FNA)- The Statistical Center of Iran (SCI), in a new report, said that the inflation rate is decreasing in the country, adding that it is down by 1.6 percent in the month ending on February 19, 2019.

TEHRAN (FNA)- Iran's Cultural Attaché in Lebanon Abbas Khameh-Yar hailed the role of Lieutenant General Qassem Soleimani in preserving the unity of the region, adding that the late anti-terror commander managed to foil many plots of the US in the Middle East.

TEHRAN (FNA)- Iranian Foreign Ministry Spokesman Seyed Abbas Mousavi denounced the US for imposing sanctions against some political figures of his country, including 5 members of the Guardian Council (GC), and underlined that such measures demonstrate nothing but the failure of Washington’s policy of “maximum pressure”.

TEHRAN (FNA)- The Kremlin expects that as the US presidential election approaches, there will be an increasing number of reports about Russia’s alleged attempts to interfere in the vote, Russian Presidential Spokesman Dmitry Peskov told reporters, commenting on a New York Time article claiming that Moscow "was interfering in the 2020 campaign to try to get President Donald Trump re-elected".

Iraq Names Successor to Anti-Terror PMU Head Assassinated by US

General Haftar: Withdrawal of Mercenaries, Turkish Troops from Libya A Condition for End of Hostilities

2 Dead, 3 Injured in Shooting at Apartment Complex in Idaho

TEHRAN (FNA)- Two people died, and another three were injured, including a police officer, in a shooting at an apartment complex for senior citizens in the US city of Caldwell, located in the state of Idaho, the local ABC-affiliated KIVI TV channel reported.

TEHRAN (FNA)- German Chancellor Angela Merkel stated there are multiple signs that the suspected gunman who killed nine people at two hookah bars in Hanau acted out of right-wing extremist motives and racism.

TEHRAN (FNA)- Iran’s 11th parliamentary and Assembly of Experts elections kicked off on Friday morning February 21 all over the country. [PHOTOS]

TEHRAN (FNA)- Spokesman of Iran's Guardian Council Abbas Ali Kadkhodayee who has recently been sanctioned by Washington said that the Iranian people's mass-participation in elections will be a strong response to the US arrogance.
﻿
﻿
Sections