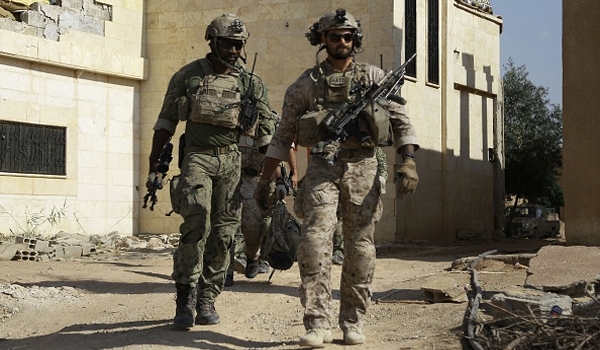 TEHRAN (FNA)- Footage released recently revealed that the US is operating an airbase in the Eastern parts of Aleppo near the provincial border with Raqqa.

According to AMN, the footage showed a large US plane taking off and plenty of Humvees protecting the site.

Also, an American flag is hoisted above the air field which is located in the territory controlled by the Kurdish-led Syrian Democratic Forces (SDF)

Meanwhile, Colonel Ryan Dillon, the US-led Coalition Spokesman, confirmed dozens of US military advisors were deployed inside Raqqa city with US marines providing artillery support against the ISIL from the surrounding areas.

He said the troops, many of them special operations forces, are working in an “advise, assist and accompany” role to support Kurdish fighters in battle against ISIL.

“They are much more exposed to enemy contact than those in Iraq,” Dillon added.

He stressed that the number of US forces in Raqqa was "not hundreds" and that they had been working closely with SDF fighters since the operations to encircle Raqqa began.

The Pentagon is secretive about exactly how big its footprint is in Syria, but has previously declared that some 500 US special forces are there to train and assist the SDF.

Kurds heavily assisted by US soldiers and bombers – have captured some 35% of Raqqa city despite facing fierce resistance from the ISIL militants.

Meantime, other reports said that the US-led forces have several times transferred the ISIL leaders from Iraq and Syria to other regions by heliborne operations.

Local sources reported on Wednesday that three military helicopters of the US-led coalition carried out another heliborne operation in Eastern Homs, carrying a number of ISIL terrorists on board.

The Arabic-language al-Hadath news quoted the sources as saying that a group of ISIL terrorists were transferred by a van from the town of Ayash in Eastern Deir Ezzur to a ISIL-held desert region in the Eastern direction of the town of al-Sukhnah in Eastern Homs, where three helicopters of the US-led coalition were hovering over the region.

One of the helicopters landed but the other two continued to fly over the region.

The sources told al-Hadath that the three helicopters flew towards North and entered Raqqa airspace, adding that there is no information about their exact destination.

The sources further said that the ISIL militants taken away by the American choppers could have been one of the spying groups used by Washington via Jeish Maqavir al-Thowrah militant group to materialize its objectives in the region.

TEHRAN (FNA)- Iranian envoy in Venezuela Hojjat Soltani strongly rejected a Wall Street Journal report claiming that the US has seized four Iranian tankers, while another official in similar remarks said neither the ship nor the cargo belong to Iran.

TEHRAN (FNA)- Media outlets should be treated in an equal manner and not on a case-by-case basis if they comply with the laws and regulations of the countries they operate in, a Spokesperson for the Chinese Embassy in Russia said regarding the recent actions of Twitter.
﻿
﻿
Sections