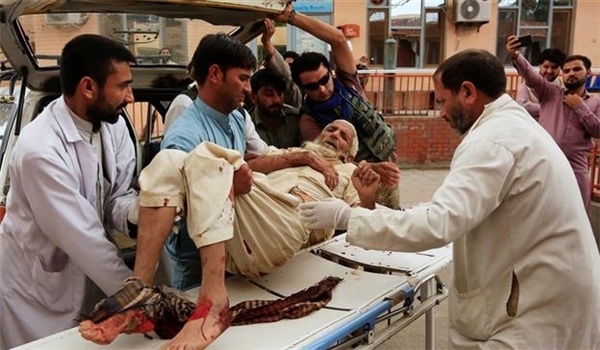 TEHRAN (FNA)- Unidentified gunmen have attacked a Sikh-Hindu temple in the Afghan capital, Kabul, taking up to 200 worshipers hostage.

Afghan Interior Ministry Spokesman Tariq Arian said on Wednesday that Afghan security forces had blocked off the area and were battling the gunmen in an attempt to rescue the hostages, presstv reported.

“People are stuck inside the building and (security forces) are trying to rescue them,” Arian said.

Narender Singh Khalsa, a lawmaker who represents the Sikh community, said he had reports that up to 200 people trapped inside the temple in the attack, which started early in the morning.

Afghanistan’s TOLOnews cited an unnamed security source as saying that at least 10 people had been killed and more than 10 others wounded in the ongoing standoff.

No group has so far claimed responsibility for the attack. Both the Taliban and Daesh (ISIL or ISIS) groups carry out assaults in the country.

Sikhs are a small religious minority in Afghanistan. Around 1,000 Sikhs and Hindus are estimated to reside in the overwhelmingly-Muslim nation.

In 2018, a bomb attack targeting the Sikh community killed more than a dozen people in the Eastern Afghan city of Jalalabad. The Daesh terror group claimed responsibility for that attack.

The ongoing attack comes a day after the United States said it was cutting one billion dollars in aid to Afghanistan, voicing disappointment that rival leaders in the country had failed to form an inclusive government.

Afghanistan is currently mired in a political stalemate, with former official Abdullah Abdullah claiming victory in a presidential election that President Ashraf Ghani has officially won.

The US came to an agreement with the Taliban in February to begin withdrawing troops. But the militants have not stopped hitting government targets.

Afghanistan is also struggling to tackle its outbreak of the new coronavirus.

TEHRAN (FNA)- Japanese Prime Minister Shinzo Abe on Saturday called upon citizens to prepare themselves for the "worst-case scenario" and lengthy battle against COVID-19 that will include unprecedented economic measures.

TEHRAN (FNA)- Chancellor Angela Merkel urged Germans to continue to cooperate with a nationwide shutdown aimed at halting the coronavirus pandemic, arguing that the large number of daily infections means that the measures must remain in place.
﻿
﻿
Sections