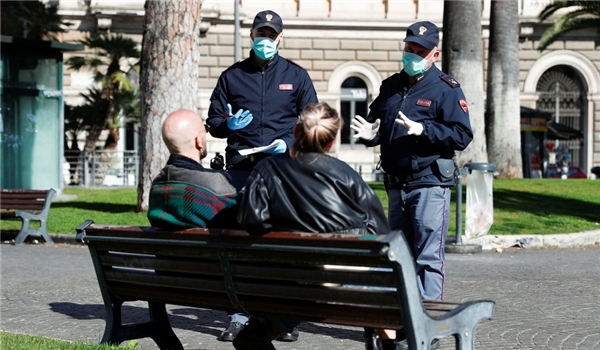 TEHRAN (FNA)- Rome decided to raise fines for people defying quarantine requirements by up to 15 times in a desperate attempt to curb the outbreak of the deadly coronavirus that has already killed more people in Italy than anywhere else.

Any Italian caught leaving their home without a very good reason could face a penalty between €400 and €3,000 ($430 to $3,227) from now on, Prime Minister Giuseppe Conte announced in a televised address on Tuesday, RT reported.

All non-essential businesses in Italy are still ordered to stay closed until at least April 3. There are also rumors that the nationwide quarantine could be extended beyond that date since the government has the power to prolong it until July 31.

Previously, the fines for violating social distancing requirements amounted to €206 ($221). That sum apparently failed to be an effective barrier against violations since a whopping 50,000 people were charged with breaching the rules since they were introduced, according to media reports.

People defied the ban on leaving their homes for such trivial reasons as fishing, playing cards or drinking beer. Even some priests were found in breach of the quarantine, although they did it to hold funerals.

Italy has become the new epicenter of the dreaded disease and arguably the nation worst hit by the coronavirus, also known as Covid-19.

The new measures were announced just as the national death toll linked to the virus once again soared by 743 in a single day reaching more than 6,800. It is now twice as high as that in China, where the virus first originated.

Earlier, the Mediterranean nation hoped it had managed to turn the tide as it saw a decline in the number of new fatalities for two days in a row. The number of confirmed coronavirus cases in Italy also rose by 5,249 over the last 24 hours to 69,176.