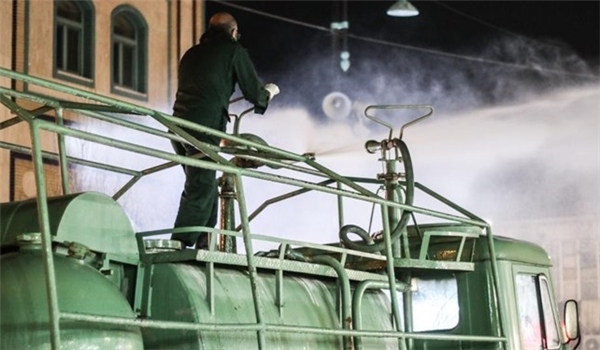 TEHRAN (FNA)- The Islamic Revolution Guards Corps (IRGC) Ground Force on Wednesday kicked off nationwide biological defense drills in coordination with the national coronavirus campaign headquarters in line with the policies of the General Staff of the Iranian Armed Forces.

The exercises will be staged in 3,000 regions of the country and 100 points in the capital city of Tehran with the IRGC Ground Force and Basij (volunteer) forces in participation.

100 IRGC Ground Force units have been formed that operate under 10 bases to conduct disinfection operations across the country.

The Iranian Army had also on March 15 launched massive nationwide drills in a bid to step up readiness in the face of biological threats against the country amid the spread of the new coronavirus, COVID-19.

The plan for the biological defense wargames was unveiled by Army Chief Commander Major General Abdolrahim Mousavi during an extraordinary meeting held to coordinate efforts in the battle against the COVID-19.

According to General Mousavi, the wargames kicked off under the command of the Army’s Biodefense Base and under the supervision of Deputy Chief of Army for Coordination Rear Admiral Habibollah Sayyari.

The Army’s biodefense drills come in line with an edict by Supreme Leader of the Islamic Revolution Ayatollah Seyed Ali Khamenei, in which he warned the outbreak might be the result of a “biological attack” against the Islamic Republic.

“Since there is some evidence that this incident might be a ‘biological attack’, this measure could be also some form of biological defense drill, which would add to national power and strength [of the country],” the Leader said.

As part of efforts to fight the outbreak of the novel coronavirus, the IRGC has in turn opened three field hospitals in northern and southern Iranian provinces.

"Given the outbreak of the coronavirus in the country and people's need to have access to health and medical centers, two hospitals that contain 30-40 beds have started their work in the city of Borazjan [in the Southern Bushehr Province] and a 54-bed mobile hospital in [the southern port city of] Bandar Abbas," IRGC Navy Commander Rear Admiral Alireza Tangsiri said.

He added that another 74-bed mobile hospital has opened in the Northern city of Rasht and noted that the hospital's capacity can be increased to 120 beds in order to provide more services to confirmed coronavirus patients.

Also, earlier this month, Commander of the Iranian Army Ground Force Brigadier General Kiomars Heidari announced that the military body will use three types of home-made vehicles to disinfect and sanitize public places in big cities across the country to further contribute to the national campaign against the new coronavirus outbreak.

Brigadier General Heidari said that three types of new domestic vehicles have been designed and produced and will be used for disinfecting public places.

Heidari said that based on the requirements of anti-coronavirus committee and in line with increasing disinfecting machinery, Iranian engineers have produced three new disinfecting vehicles with good quality.

Meantime, Chief of Staff of the Iranian Armed Forces Major General Mohammad Hossein Baqeri announced that security forces will increase their contribution to the national campaign against the spread of the novel coronavirus, with enforcing travel limitations and screening for virus-hit suspects.

"Over the next one week to 10 days, the entire Iranian nation will be monitored once through cyberspace, by phone and, if necessary, in person, and those suspected of the disease will be identified," said Baqeri earlier this month.

"Our law enforcement and security committees along with the Interior Ministry and provincial governors will be clearing shops, streets and roads in a national decision. This work will be organized within the next 24 hours," he added.

He noted that the suspected cases would be then transferred to medical centers and said the Iranian Armed Forces would establish up to 1,000 treatment units to provide clinical examinations for coronavirus patients and would do their utmost to treat them.

The top commander called on Iranian people to pay heed to all recommendations and requests by the Health Ministry to help defeat the virus as soon as possible, otherwise, he said, the containment would take more time.