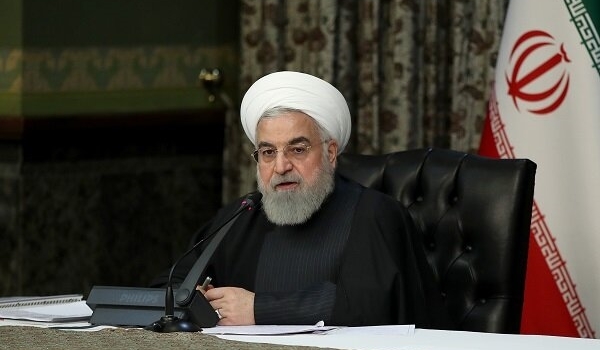 TEHRAN (FNA)- Iranian President Hassan Rouhani praised the country’s people for taking the health ministry's recommendations for the prevention of coronavirus infection seriously, and lauded again the devotion and dedicated efforts of the medical staff.

He also thanked the devotion and self-sacrifice of all the medical staff in the country, stressing that it is still imperative to regard social distancing, keep contacts minimal and reduce travels to the least possible.

President Rouhani referred to the report presented at the session and described the decreasing number of hospital check-ins and death toll as indications of vital working measures.

“Among the topics discussed was a report where, overall, it was evident that hospital check-ins in provinces had declined and that the death toll was declining, both of which were important to us. The steps taken so far have been important,” he said.

“Once again, we thank the health system of the country for all the hard work, dedication and sacrifice it is making for this important work, and thank our dear people for heeding the recommendations. Statistics show that most people pay attention to these recommendations,” the president said.

“One of the important issues raised at the meeting is that we must implement policies to provide the health system with the time needed for treatment. So we have to act in a way that our beds, our intensive care unit, and our doctors and nurses have the potential and capacity to do this.

The next issue was for us to do something that in terms of health care, the virus would not spread so that we could break the chain and it was suggested that an infected person would infect several people if they had normal contact, and what happens if they were quarantined.

Therefore, it is important that if we find out somebody is infected by the virus he or she must be quarantined for two weeks,” he added.

“Therefore, it has been recommended that all those businesses or gatherings that were declared closed before, remain closed until April 3, including education centres and shopping malls, except for groceries, shops selling hygiene products and people’s daily needs.

The Ministry of Health has announced in our previous sessions that social distancing must be around 2 metres, and we must pay attention to these recommendations,” the president said.

He noted that it is still imperative to keep contacts minimal and reduce travels to the least possible until the end of holidays, which is April 19, and said, “The other issue was the number of cars that have exited province capitals; for example, Tehran and Karaj were brought up. Naturally, they have numbers and we have their mobile numbers. It would be good to ask the same questions from the owners and if somebody has a problem, we can address it.”

“I emphasize once again, we had previously decided that cars have to be examined at city exits and people must be checked for temperature, but someone told me that he was checked three times on the way from Tehran to Karaj. This is not what we announced.”

“I once again ask the governors and governor generals to pay attention to all decisions.”

Noting that another point that was raised at the meeting was about companies that provide public services and instead of people going to the stores they provide services and bring what people need to their door, and said, “These companies are expected to continue their efforts, and if they have problems with the supply of services, the Ministry of Communications and Information Technology should assist them.”

“The goal is to reduce people’s going out of house so that one person can get out instead of 10 people.

“Some other employees, that means around 500 thousand people or less, can begin working and 2/3 of whom can stay home until April 3.”

“I urge the dear people of our country to observe the health recommendations so that we can overcome this problem,” the president said.

The coronavirus COVID-19 is affecting over 180 countries and territories around the world. The virus was first reported in the central Chinese city of Wuhan late last year. It has so far killed more than 16,700 people and infected over 386,000 others globally.