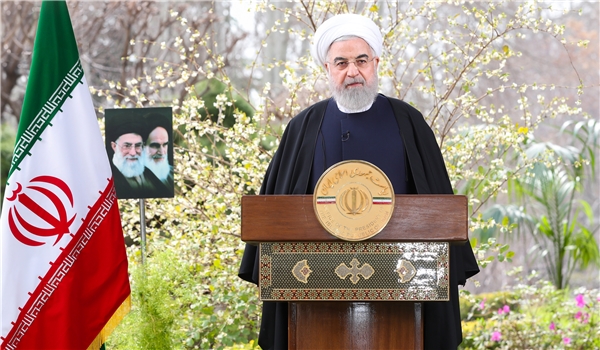 “The new year will be the year of inauguration of big projects, the year of blossoming in economy, development in people’s life, economic relations with the world and our interactions with the neighbors with the help of all people,” President Rouhani said in a televised address on the occasion of the Nowruz which marks the Iranian New Year.

He said that the Iranian nation during the past year which just concluded managed to create an epic by running the country's economy without relying on oil revenues.

The president said the year 1398 (March 21, 2019-March 19, 2020) was the year of launching many great projects, the year of a prospering economy due to the endeavors of people from all walks of life and also the year of many developments in the lives of Iranian people as well as Iran's economic relations with the world and interactions with neighbors

Rouhani referred to numerous incidents that happened in the course of the year and also the problems the nation faced last year, and said that during the new Iranian year which has just started the issue of health will be at top of agenda for the government.

He expressed confidence the nation will achieve this goal with the assistance of the medical staff who should be put all their energy into it and also the efforts of the private sector companies that need to stand by the government to make the new year a year of good health, growing employment and prosperity in economic and cultural arenas.

Noting that the past year started with unprecedented floods which affected 25 provinces and caused big calamities, he said the very same incident also provided a chance to witness cooperation and unity within the nation and also between the nation and the government.

Pointing out that the floods caused rls. 350,000 billion worth of damage, destroyed over 68,000 houses and damaged 80,000 houses, he said most of the houses were reconstructed and many new houses were built.

The President also referred to the harshest sanctions the Iranian oil industry faced during its history as well as the pressures which the economy suffered, and said enemies fancied they will bring the Iranian nation to its knees by exerting such pressures by the nation withstood all hardships and created yet another epic by managing the economy without relying on oil revenues which was a unique achievement.

He said enemies thought they could push the country into a crisis using recession and inflation as a tool, but as statistics have it, Iran registered a positive economic growth in the first nine months of the past year and managed to harness the inflation.

Despite all difficult days, he added, the government opened a number of country's biggest operation in decades including big refineries to grand domes, to upgrading gas and oil projects and inaugurating freeways, railway connections and ports.

"We were never defeated. We confronted the US pressures, we resisted them and we were victorious in international courts against the US and recorded many other triumphs in political areas and also in the world public opinions," he stressed.

President Rouhani also referred to downing of a US drone by Iranian-made missiles, as another case of Iran's successes during the past year and, pointing to the assassination of the IRGC Quds Force Commander Lieutenant General Qassem Soleimani by the US in Iraq, and said the response of Iran to this terrorist act of America was so strong that the US has not able to overcome its impact yet.

He also referred to the outbreak of the COVID 19 in Iran which has also infected 170 other nations worldwide, and praised the cooperation and humanistic feeling manifested by all Iranians as well as the medical staff who came out with uttermost zeal to fight the lethal disease.

Nowruz, which coincides with the first day of spring on the solar calendar, is mostly celebrated in Iran, Afghanistan, Azerbaijan, India, Kyrgyzstan, Tajikistan, Pakistan, Turkey and Uzbekistan.

The International Day of Nowruz was registered on the UNESCO List of the Intangible Cultural Heritage of Humanity on February 23, 2010.

For Iranians, Nowruz is a celebration of renewal and change, a time to visit relatives and friends, and pay respect to senior family members.