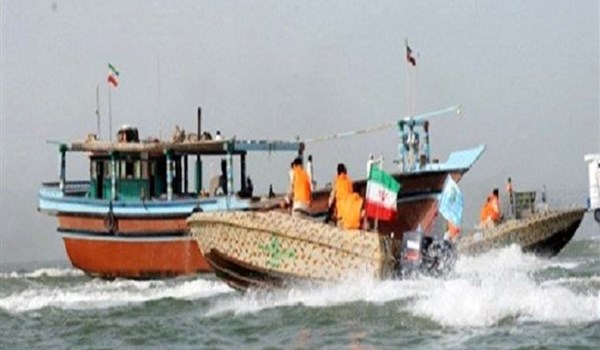 Commander of Maritime Guards of Khuzestan Province Brigadier Lotfali Pakbaz said that maritime guards identified and seized a smuggled cargo of diesel fuel in Bandar Mahshahr in the Persian Gulf.

Some 40,000 liters of smuggled diesel fuel have been seized in this regard, he added, saying that fuel smugglers were trying to transfer this illicit cargo to Persian Gulf states.

According to Pakbaz, some 60,000 liters of smuggled fuel have been also seized last week in the province.

Fuel, especially diesel, is being moved illegally out of the country through cities bordering Afghanistan, Pakistan, and Turkey, says Alireza Zeighami, deputy oil minister for refining and distribution. Between 7 million-10 million liters of petrol and diesel are smuggled out every day, according to Iranian state media. Analysts are attributing a 7 percent rise in fuel consumption to an increase in smuggling activity.

In December, some 1,500 liters of smuggled fuel were found and seized in Alborz County of Iran’s Qazvin province, Chief of the county Colonel Bahram Mansouri announced, adding that the smuggler has also been detained.

In November, Police announced that it confiscated more than 2,000 liters of smuggled fuel in Maku, a border county in the Northwestern province of West Azerbaijan.

In October, Police Chief of the Southeastern province of Sistan and Baluchistan Brigadier General Mohammad Qanbari said that the attracting crime of fuel smuggling out of Iran is being seriously fought, adding that his forces have confiscated nearly 7.8 million liters of smuggled fuel since the start of the local calendar year on March 21.

Brigadier General Qanbari said that through extensive operations carried out by police forces 7,796,792 liters of smuggled fuel have been seized in the province during the first 7 months of the current Iranian year (March 21- October 22), and it shows an increase compared to the corresponding period in last year.

149 fuel depots and 241 tank-trucks have been confiscated, he said.

Although Iranian rial has experienced a severe depreciation against international currencies in recent months, fuel prices, except for gas whose price was tripled in last month, have remained unchanged and this has multiplied the lucrativeness of fuel smuggling in Iran.

As reported in early June, Iran has launched a border market to sell diesel fuel to buyers in Pakistan and Afghanistan to counter smuggling of fuel ate border areas.

In September, the Islamic Revolution Guards Corps (IRGC) captured a vessel in the Persian Gulf for smuggling 250,000 liters of diesel fuel.

“The vessel was seized in the IRGC Navy's 5th region in the Persian Gulf area as it was carrying a large amount of diesel fuel illegally,” the IRGC said.

The crew of the smuggling fuel ship, which was stopped and brought under detention 32 kilometers off Iran’s Greater Tunb Island in the Persian Gulf, have been handed over to the judicial authorities to undergo legal proceedings.

The report added that the smugglers said during the interrogation that they had loaded the cargo at the Sang Salameh region and they were carrying it to the United Arab Emirates (UAE).