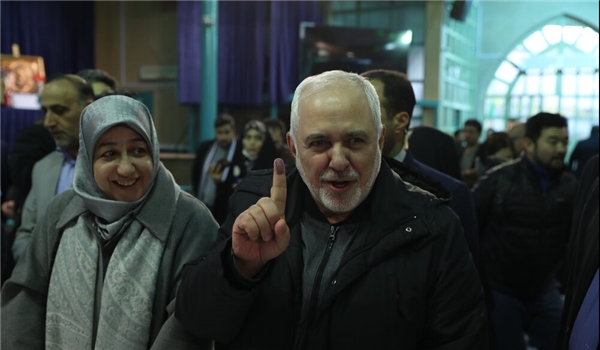 TEHRAN (FNA)- Iran's Foreign Minister Mohammad Javad Zarif underlined the importance of mass-participation of people in the Friday elections, saying that the Iranians do not allow enemies to decide their fate.

Massive turnout of Iranian people for the elections sends one signal to the world that despite all the difference, the Iranians want to determine their own fate, Zarif said after casting his vote for the parliamentary and Assembly of Experts elections in Tehran on Friday.

The Iranian people do not let someone in Washington decide for them, specially someone who has collaborated in assassination of their General Qassem Soleimani, he added.

Zarif underlined that despite all the differences, the election is still the best way to strengthen the country at international level enabling us to build a more beautiful country for the next generation.

Iranians headed to the polls to elect 290 members of Majlis (the parliament) and 7 members of the Assembly of Experts in its midterm elections on Friday morning.

Voting started at 8 a.m. local time (0430GMT) and will continue till 6 p.m. (1430GMT). Officials will extend the voting time if faced with long ques of voters at the polling stations.

Last Tuesday, Supreme Leader of the Islamic Revolution Ayatollah Seyed Ali Khamenei called on people to go to the polls.

Health Minister: France's COVID-19 Pandemic Has Not Yet Peaked

TEHRAN (FNA)- France has not yet reached the peak of its Covid-19 pandemic, Health Minister Olivier Véran stated on Tuesday, as the death toll from the deadly disease in the country has reached more than 8,900.

India Hospital Shuts After Surge in Coronavirus Cases Among Staff

TEHRAN (FNA)- A major private hospital in Mumbai has been closed to new patients and declared a coronavirus containment zone after 26 nurses and three doctors tested positive, an official has said.

TEHRAN (FNA)- Israel’s nursing homes are seeking government assistance at a time when nursing homes around the world are increasingly finding their residents ravaged by the coronavirus.

COVID-19 in US: Union Official Says Firefighter Shortage Could Lead to Lag in 911 Response

TEHRAN (FNA)- A firefighter shortage could lead to a lag in response times after 911 calls, an International Association of Fire Fighters (IAFF) official said on Monday.

TEHRAN (FNA)- Iranian First Vice-President Eshaq Jahangiri announced on Tuesday that the country will have no need to imports of masks and disinfecting materials from foreign states to fight against coronavirus in the near future.

Iran Hopes to Control Coronavirus by Late May

TEHRAN (FNA)- Iranian Health Minister Saeed Namaki stressed effective measures to control coronavirus epidemic, expressing the hope that the disease would be controlled in Iran by late May.

TEHRAN (FNA)- Iranian Embassy in Rome announced that the country’s students can come back to Italy if they register with Italian Post Office, adding that Italian residence permit is not an electronic permit of the EU.

US Officer Killed in Ambush in Eastern Syria

TEHRAN (FNA)- A US officer has been killed in an ambush in the Eastern Syrian province of Deir Ezzur.

TEHRAN (FNA)- Turkey announced new confirmed cases of the novel coronavirus on Monday evening as it continued efforts to curb its spread.

TEHRAN (FNA)- In the middle of the coronavirus crisis, many hospitals across the US are suddenly losing revenue, while in some cases that means staff are being furloughed, right as the pandemic is worsening, CBS News reported.

TEHRAN (FNA)- Deputy Commander of the Islamic Revolution Guards Corps for Health, Medical Training and Biological Defence Affairs Brigadier General Ahmad Abdollahi announced that the IRGC has set up 1,920 hospital beds to help the health ministry with treatment of coronavirus patients in Iran.

TEHRAN (FNA)- A research center associated with the Islamic Revolution Guard Corps (IRGC) has unveiled a modern thermal imaging system for screening people suspected of having COVID-19, the disease caused by the new coronavirus pandemic. [VIDEO]

TEHRAN (FNA)- Exterior facade of the Belarusian National Library building illuminated in three colors of the Iranian flag as a sign of solidarity and sympathy with the country's people in combating coronavirus.

TEHRAN (FNA)- The secretary general of the Arab League appealed to the International Committee of the Red Cross (ICRC) to secure the release of Palestinian prisoners from Israeli detention centers amid rising cases of infection with a new coronavirus in the occupied territories.
﻿
﻿
Sections