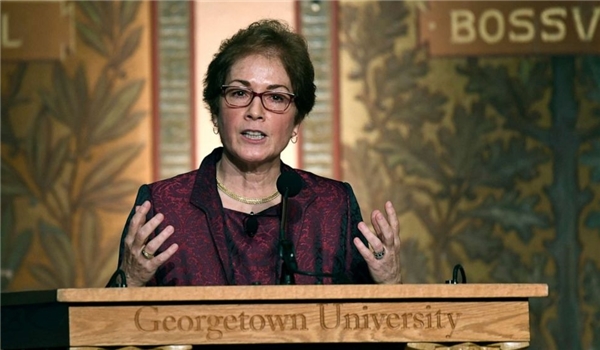 TEHRAN (FNA)- The former US ambassador who was a key figure in President Donald Trump's impeachment trial criticised US foreign policy as "amoral" and based on threats.

Marie Yovanovitch, who Trump abruptly recalled last May from her post as US ambassador to Ukraine, spoke on Wednesday at Washington's Georgetown University where she received a prize from the school's Institute for the Study of Diplomacy, Al-Jazeera reported.

"To be blunt, an amoral, 'keep-em-guessin' foreign policy that substitutes threats, fear and confusion for trust cannot work over the long haul," Yovanovitch said.

Trump last year disparaged Yovanovitch in a telephone call with Ukrainian President Volodymyr Zelenskyy which was the centre of his impeachment for abuse of power.

The House of Representatives impeached him for pressuring Ukraine to announce investigations, including into his political opponent Joe Biden.

In October, Yovanovitch testified to Congress that she was recalled due to "unfounded and false claims by people with clearly questionable motives".

The 33-year diplomatic veteran said she was subjected to a smear campaign orchestrated in part by Trump's personal lawyer Rudy Giuliani.

She also levelled criticism at the State Department's leadership, and by extension, Secretary of State Mike Pompeo, for failing to push back against forces that "apparently hijacked our Ukraine policy", or to support her in the face of "dangerously wrong" attacks.

In her Georgetown address, Yovanovitch called for the State Department to develop a stronger relationship with Congress, to offer more training and flexibility for diplomats and to take seriously the job of countering misinformation.

The Trainor Award she received is presented to "an outstanding American or foreigner for distinction in the conduct of diplomacy", according to Georgetown.