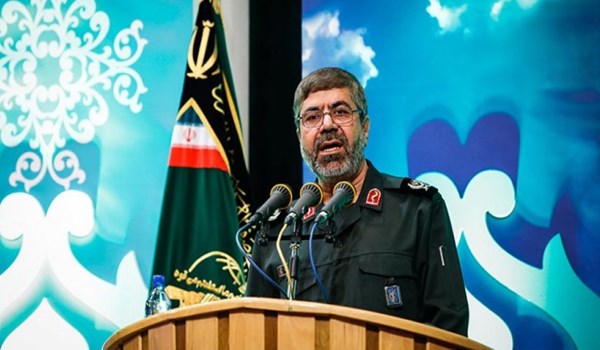 TEHRAN (FNA)- Spokesman of the Islamic Revolution Guards Corps Brigadier General Ramezan Sharif said that the US assassination of IRGC Qods Force Commander Lieutenant General Qassem Soleimani will eventually lead to the expulsion of Washington's troops from the region.

Like the way General Soleimani's mission was to reinforce the Resistance to counter the Zionist regime, his demise, too, was also a help to that cause, General Sharif said, addressing a ceremony to commemorate General Soleimani in Orumiyeh, Northwestern Iran.

He said that all the plots of the US have failed because of the Resistance and General Soleimani's efforts.

After the US assassinated General Soleimani, General Sharif said, the IRGC slapped them in the face by targeting their most advanced airbase in Iraq, Ain al-Assad, which disgraced them so their expulsion from the region is a certain fate for them.