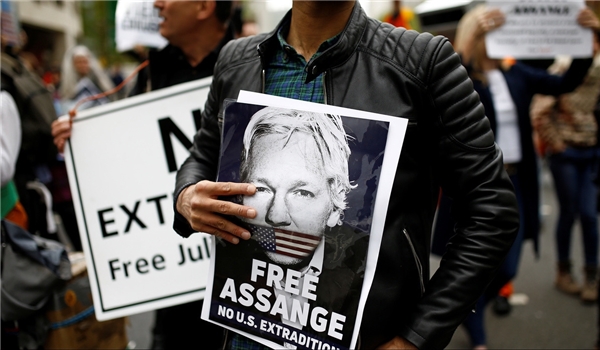 TEHRAN (FNA)- The Australian government has been implored to urgently intervene in Julian Assange’s extradition plight and to bring its citizen home, by a senator who warned that the WikiLeaks founder faces death in a US prison.

Assange is currently in jail in the UK and fighting extradition from there to the US, where he has been charged with espionage for publishing sensitive leaked documents detailing potential American war crimes in both Afghanistan and Iraq, RT reported.

Australian Greens Senator Peter Whish-Wilson is a member of the ‘Bring Assange Home Parliamentary Group’ campaigning for the journalist's safe return to the country and voicing their alarm over his deteriorating health while in detention.

In November, Whish-Wilson presented a petition to the Senate with 200,000 signatures backing the repatriation of Assange and, on Tuesday, he renewed his calls for the government to take action to protect Assange.

“This Australian journalist faces 175 years - that is, death - in a US jail,” Whish-Wilson said.

“And for what? For publishing truthful information in 2010 that embarrassed the US government about their wars in Iraq and Afghanistan and what they thought they could get away with in Guantanamo Bay,” he added.

Assange’s mother, Christine, tweeted a message of thanks to Whish-Wilson for his support, saying her son has already “endured nearly a decade of abuse of legal process and brutal persecution” by foreign governments in retribution for revealing evidence of US war crimes.

She has repeatedly called on the Australian government to help secure his release.

Part of the journalist’s extradition challenge is being heard this month, with the second half scheduled for May.

TEHRAN (FNA)- Iranian officials announced that all desert areas are closed to the tourists for safari and other entertainment purposes due to fears of coronavirus epidemic.
﻿
﻿
Sections