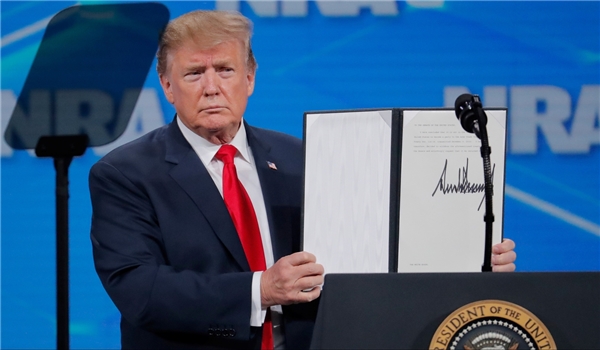 Trump threatened to attack Iranian historical and cultural sites which constitutes instance of war crime, Saberi said on Wednesday, addressing a ceremony to commemorate the 41st anniversary of the Islamic Revolution victory on Wednesday.

He added that US unilateralism in the Middle East has deteriorated regional security, noting that the US seeks to impose its interests on other nations.

Saberi also said that the US terrorist attack to assassinate IRGC Qods Force Commander Lieutenant General Qasem Soleimani who had made all his efforts to defend the country and fight terrorist-Takfiri groups of ISIL in Iraq and Syria was a blatant atrocity crime perpetrated by Trump Administration.

Due to the fact that General Soleimani was in Iraq upon Iraqi government's request, it was the example of norm-breaking and inhumane measure and clear violation of UN Charter and an international crime, he added.

In his tweet last month, Trump said the targets represented 52 Americans who were held in Iran for acts of espionage following the 1979 takeover of the US embassy in Tehran by revolutionary students .

“Targeting cultural sites is a WAR CRIME; -Whether kicking or screaming, end of US malign presence in West Asia has begun,” he stressed.

“Those masquerading as diplomats and those who shamelessly sat to identify Iranian cultural & civilian targets should not even bother to open a law dictionary,” he added.