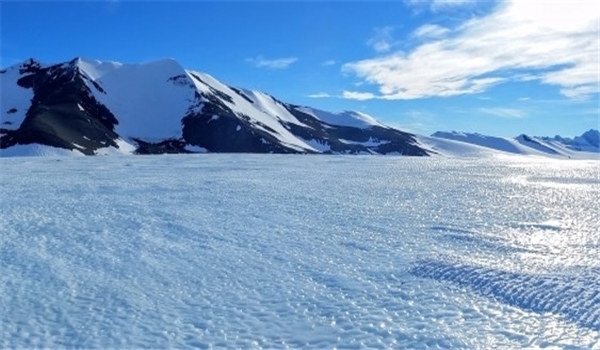 TEHRAN (FNA)- Scientists digging into the ancient history of Antarctica's ice sheets have uncovered evidence of an "extreme" melting event that drove rapid and significant sea level rise, which they see as a cautionary tale for climate change.

The work was led by scientists at Australia's University of New South Wales Sydney, who set out to study the behavior of the West Antarctic Ice Sheet during a period known as the Last Interglacial, which took place around 129,000-116,000 years ago. At this time, ocean temperatures were likely less than 2° C warmer than they are today, which makes it an ideal period to study how global warming could impact sea levels and melting ice in the region.

To do this, the team took advantage of what are known as blue ice areas, which are created by strong winds that roll over the mountains and blow the top layer of snow away, in turn eroding the exposed ice. When this happens, ancient ice flows upwards towards the surface, presenting scientists with a time capsule and a window into the ice sheet's ancient history.

“Instead of drilling kilometers into the ice, we can simply walk across a blue ice area and travel back through millennia. By taking samples of ice from the surface we are able to reconstruct what happened to this precious environment in the past,” says Professor Chris Turney, who led the research team.

Isotope measurements of the samples enabled the team to piece together the sheet's history, and in doing so they noticed a gap in the record, which occurred right before the Last Interglacial. This gap happens to coincide with an extreme rise in sea levels that took place around the same time, suggesting that the ice melted away into the surrounding waters. This conclusion was supported by examinations of fine volcanic ash and trace gases in the samples, along with the DNA of the bacteria trapped inside the ice.

Some scientists believe that at some time during the Last Interglacial, global mean sea levels were around six to nine meters (20 to 30 ft) higher than they are today, with some scientists suspecting they could have been as much as 11 m (36 ft) higher. A number of factors are thought to have contributed to this, including melting glaciers, thawing of the Greenland Ice Sheet and expanding oceans as a result of warmer waters. The team says this new study indicates West Antarctica had a big role to play, singlehandedly causing a rise in sea levels of more than three meters (9.8 ft).

“We now have some of the first major evidence that West Antarctica melted and drove a large part of this sea level rise,” says Professor Turney.

What concerns the scientists with regard to the future is how vulnerable the West Antarctic Ice Sheet appears to be to warmer waters. This is because it rests on the seabed rather than the ground, like the East Antarctic Ice Sheet, and ocean water fills cavities underneath it that melts the ice from below.

“The West Antarctic Ice Sheet is sitting in water, and today this water is getting warmer and warmer,” says Turney.

To explore how things could pan out if the planet continues to warm as expected, the team used the data they collected to run model simulations and explore effects on the ice shelves, which sit against the sheets and slow the rate of ice flow from the continent.

Their results point to a 3.8-m (12.5-ft) increase in sea levels within the first thousand years of a 2° C warmer ocean, while the ice shelves would collapse completely within the first 200 years. This, the team believes, could set off an irreversible chain of events that includes the melting of the East Antarctic Ice Sheet, sending sea levels even higher.

“Our study highlights that the Antarctic Ice Sheet may lie close to a tipping point, which once passed may commit us to rapid sea level rise for millennia to come," says study co-author Professor Christopher Fogwill, from the UK's University of Keele. "This underlines the urgent need to reduce and control greenhouse gas emissions that are driving warming today."

From here, the researchers hope to cast a wider net with their techniques to see which other parts of the sheet were impacted and how fast they may have melted.

“We only tested one location, so we don’t know whether it was the first sector of Antarctica that melted, or whether it melted relatively late," says Turney. "How these changes in Antarctica impacted the rest of the world remains a huge unknown as the planet warms into the future. Testing other locations will give us a better idea for the areas we really need to monitor as the planet continues to warm."