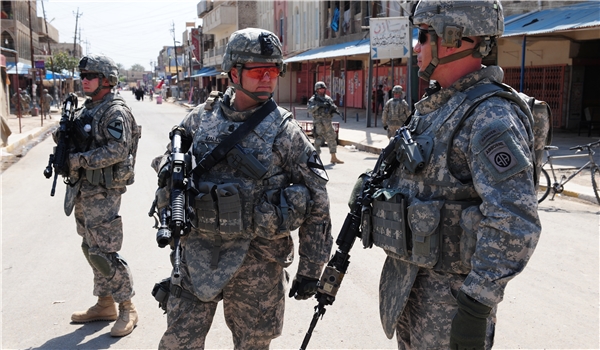 TEHRAN (FNA)- The Iraqi army decided not to take assistance from the US military forces in operations against the ISIL terrorist group in al-Anbar province.

The Arabic-language service of Sputnik news agency reported that the first stage of operations titled 'Iraq's heroes' to cleanse al-Anbar and rural areas at common borders between Iraq and Syria and Jordan started on Wednesday morning.

A security source said the Iraqi army has filed no request for US-led coalition experts to help them arm F-16 fighter jets with missiles, and used Iraqi technicians.

The source said that only the Iraqi forces take part in the operations and no foreign forces, specially the Americans, will be present in the battle.

The Iraqi army and Hashd al-Shaabi have doubled efforts to cleanse ISIL terrorists from al-Anbar province.

Hashd al-Shaabi (Iraqi popular forces) announced in a statement last Sunday that it had erected security checkpoints near the Iraqi-Syrian border to prevent ISIL terrorists' infiltration.

The statement said that the checkpoints have been established near the town of al-Qa'em in Western al-Anbar to protect the town's security.

The Arabic-language service of Russia Today quoted the statement as saying that the checkpoints have improved security at bordering areas between Iraq and Syria as well as the roads linking the two countries.

Qa'em is the point used by the ISIL terrorists to traffic from Syria into Iraq and then deploy in al-Anbar province with the US help.