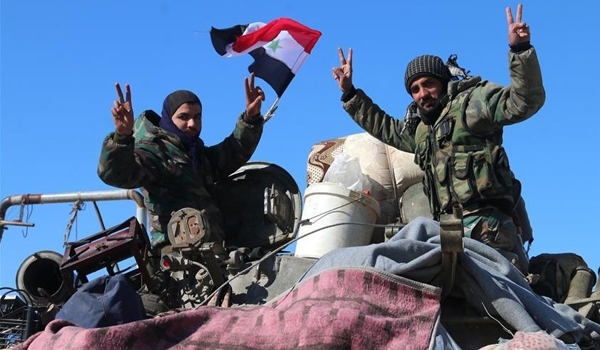 TEHRAN (FNA)- The Syrian army took back control of the two villages of Khan al-Assal and Kafar Nouran in Western Aleppo from the terrorists.

The Arabic-language service of SANA news agency reported that Khan al-Assal in Western Aleppo and Kafar Nouran in Southwestern Aleppo were recaptured on Tuesday evening and cleansed of terrorists.

Meantime, the Syrian army troops advanced in the Western parts of Aleppo city too on Wednesday and liberated several districts of Rashideen region, forcing the terrorists to flee the second biggest city of Syria.

Security has strengthened along the Aleppo-Damascus international highway after the recent developments and the Syrian army's control over more regions.

For the first time in more than seven years, Syrian army forces reportedly managed to wrest control of a key highway connecting the capital Damascus to the second largest city Aleppo.

The so-called Syrian Observatory for Human Rights (SOHR) reported on Tuesday that Syrian soldiers and their allied fighters had recaptured the M5 highway after liberating an area in Aleppo Province, which was the last militant foothold on the road.

The liberation of the M5 motorway, which links the capital Damascus to the major cities of Hama, Homs and Aleppo, comes on the back of a months-old operation by the Syrian army to liberate Idlib Province.

Idlib and the area North of Aleppo form part of the only large territory still in the hands of militants. The Syrian military has managed to undo militant gains across the country and bring back almost all of Syrian soil under government control.