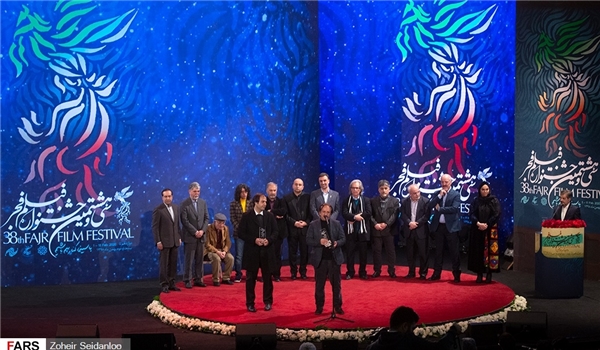 TEHRAN (FNA)- The most revered film festival of Iran closed its 38th edition with the jurors announcing the names of the winners at a ceremony in Tehran’s Milad Tower.

Iran’s 38th Fajr Film Festival, an annual motion picture awards event held to coincide with the anniversary of the victory of the country’s Islamic Revolution, has come to an end in Tehran.

The epilogue to this year’s festival unfolded on Tuesday, hours after millions of Iranians took to the streets to mark the 41st anniversary of the historic 1979 national victory that deposed the repressive US-backed Pahlavi regime.

A video clip featuring the turning points of the Islamic Revolution and the popular participation in it was displayed at the beginning of the ceremony.

Minister of Culture and Islamic Guidance Abbas Salehi, Tehran Mayor Pirouz Hanachi, Head of the country’s House of Cinema Hossein Entezami, and veteran cinematographer and cinema expert Fereydoun Jeyrani were among the guests of honor to attend the event at Tehran’s iconic Milad Tower’s convention center.

Addressing the attendees, Salehi said, “Cinema may not be capable of changing the world, but can change the atmosphere and circumstances by [contributing to] dialogue.”

“The Festival is an opportunity to engage in discussion over social, cultural, and other subjects, and cinema’s camera creates the chance for farther and deeper expansion of our views,” he added.

The high point of this year’s closure featured awarding of a special accolade in honor and memory of senior Iranian anti-terror commander Lieutenant General Qassem Soleimani, who was assassinated by the US in Baghdad in early January. The award went to “Abadan 1160,” which depicted Iranians’ struggle during Iraq’s war of 1980-88 on Iran.

The following is a list of the recipients of the other main accolades, which go to the winners each year in the form of the Festival’s trademark Simorq Award:

Best leading actress: Nazanin Ahmadi, Abr Baranash Gerefteh (The Cloud is about to Burst with Rain)

Iranian cinema has made great progress in the years after the victory of the Islamic Revolution of 1979, to that extent that many Iranian films bring home numerous international awards every year and Iranian directors and their films are well known in all cultural venues across the globe.

TEHRAN (FNA)- Foreign Ministry Spokesman Seyed Abbas Mousavi slammed a Bahraini court's verdict against Iran's Al-Mustaqbal Bank, as well as its managers and several other Iranian banks, saying that the ruling has been issued based on a fabricated dossier and allegations lacking any legal value.